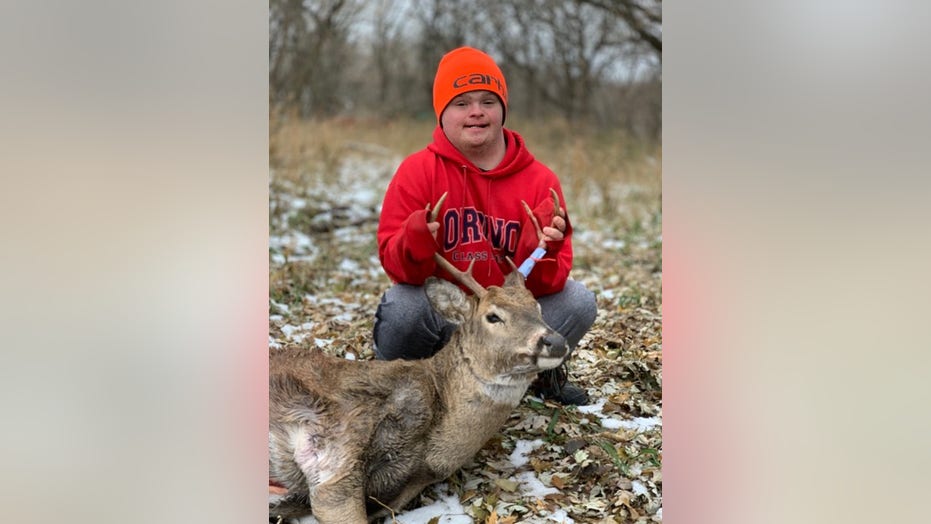 A family from Twin Cities in Minnesota celebrated a father-son victory after their 19-year-old with Down syndrome shot his first buck over the weekend, an accomplishment made possible by a change in state hunting and firearm legislation.

Steve Pennaz told Fox News on Wednesday that his son Pierce has Down syndrome and has been hunting under his supervision through a state apprenticeship that allowed him to hunt with a parent or guardian for two years. But after the two-year window closed, the Minnesota Department of Natural Resources told Steve that his son would have to take and pass an extensive firearms safety exam in order to continue to hunt.

The eight-week course and 100-question exam were too arduous for someone with Pierce's condition, Steve said.

Pierce Pennaz, 19, shot his first buck over the weekend. (Courtesy of Steve Pennaz)

Steve's concerns that Pierce might not be able to hunt again -- a family tradition -- caused him to reach out to Rep. Jim Nash in January 2018. Nash eventually championed the cause to change the laws and extend the apprenticeship program.

"He felt there was a need for a law for people with disabilities to embrace hunting," Steve said of Nash. "He cared about it because I cared about it."

Finally, on Saturday at 5 a.m., on a weekend hunting trip and after lots of preparation that included prior practice shooting pellets at targets and examining photos of deers, Pierce saw a deer in the woods.

"The deer was running and it stopped at about 120 yards in front of us," Steve said.

"[Pierece] said, 'I see the deer.' I asked him if he wanted it and he said 'yes,'" Steve said. His son took the shot and nabbed the buck.

"I think we continue as a society to underestimate what people with disabilities can do," Steve said. "He's an amazing young man, he's done amazing things and this is just another chapter that he's accomplished in terms of breaking boundaries."

Nash said he's "very happy to see that Pierce was able to harvest a buck after the bill we passed removed an unrealistic limitation on him."

"My hope is that this bill will allow many special needs hunters to spend time in the field with their parent or someone who takes them hunting," he continued. "Getting the picture from Pierce’s dad was such a thrill, I hope to see many more.”

"I see Pierce as an example to others," Steve added. "Don't underestimate these very important people. "