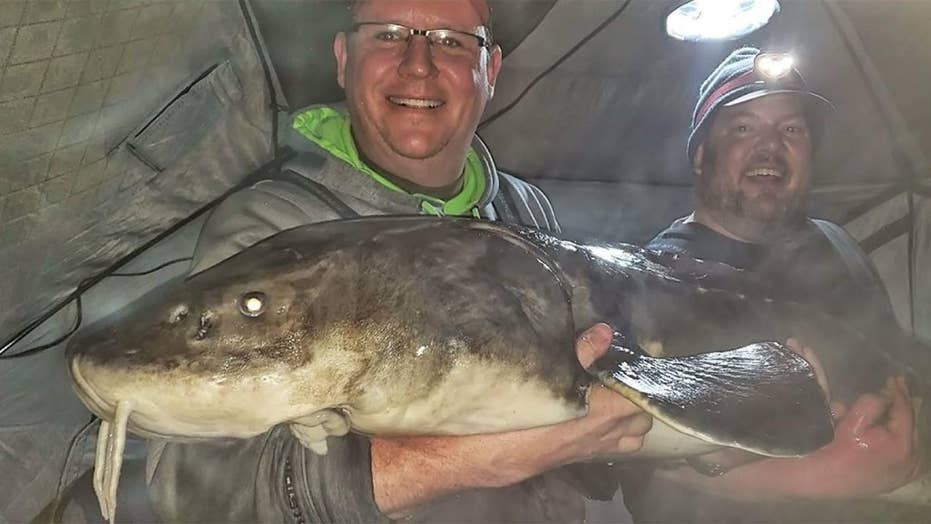 Two Minnesota fishermen smashed a state record and made Minnesota history with their recent catch of a massive sturgeon, measuring 78 inches and estimated to weigh 120 pounds.

Darren Troseth and John Kimble nabbed the creature on Feb. 5, while ice fishing on the St. Croix River, St. Croix 360 reports. On Valentine’s Day, the Minnesota Department of Natural Resources (MDNR) confirmed that the fish was not only the largest lake sturgeon caught on record, but also the longest fish nabbed in North Star State history.

“When I saw this thing my jaw dropped. To be honest, I didn’t think we would get it,” Troseth dished to the Star Tribune.

“The head on that thing was just monstrous,” he told St. Croix 360 of the sturgeon.

“That’s what I’m talking about, boys!” one excited member of the group shouts as the fish finally surfaces above the sea. “That thing is bigger than you!”

“We should get a picture. I don’t even know how I’m gonna get a picture,” another chimes in, flabbergasted by the size of the “awesome” beast.

After snapping a few photos and taking necessary measurements, the fishermen released the creature back into the icy waters. Now, they’re simply happy to celebrate their feat.

“I finally caught the fish I dream about!” Troseth said. “I feel so blessed to be able to hold a fish like that and then release it back to fight another day.”

The previous record for a St. Croix catch-and-release record was a 73-inch fish netted on the Rainy River last year, St. Croix 360 reports. The lower portion of Lake St. Croix is believed to be home to around 5,000 lake sturgeon, as per the MDNR.

Shannon Fisher, MDNR's fisheries population monitoring and regulations manager, told KARE 11 that the record-breaking sturgeon could be around 100 years old, and that its discovery is good news for environmental conservation as a whole.

“It kind of validates some of the work we're doing, that we are seeing improvements in size structure of the fish that we have,” Fisher said.