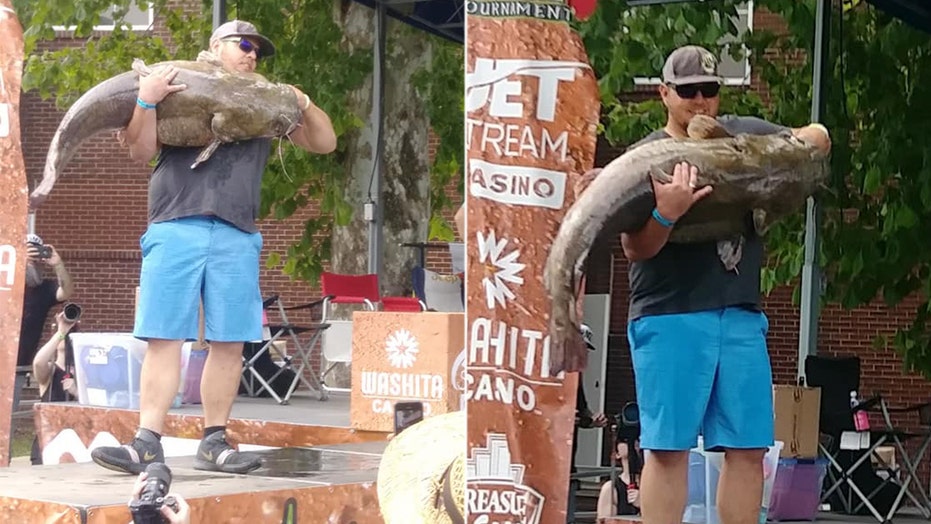 A fisherman in Oklahoma claims he couldn’t see anything when he felt an 85 lb monster catfish bite down on his arm.

Despite that, Nate Williams successfully wrestled the huge fish back to dry land, earning him his third victory in the Okie Noodling Tournament in Paul’s Valley. The massive fish might be the largest ever entered in the tournament’s 20-year history.

Noodling is a type of fishing where the fisherman uses their bare hands to catch large catfish. "Noodlers" wade or swim through muddy waters, looking for catfish holes in the ground. Once they find one, they place their hand inside of it, hoping that the catfish will bite down on it. From that point forward, it’s up to the noodler to pull the catfish out of the hole. Noodlers face several dangers, including drowning, injuries from the catfish bite and getting attacked by other animals, like alligators or snapping turtles (who may burrow their way into an abandoned catfish hole).

Heavy rains and flooding caused higher than normal water levels at the Okie Noodling Tournament, The Oklahoman reports. Williams reportedly used scuba gear while noodling, due to the added danger of the deeper than normal waters.

Williams told The Oklahoman that there were certain areas he wasn’t even willing to try because the waters were just too deep. “When I was first grabbing him, I knew it was a big fish,” Williams told the outlet, “but I had no idea until I got him out in the boat that it was that big.”