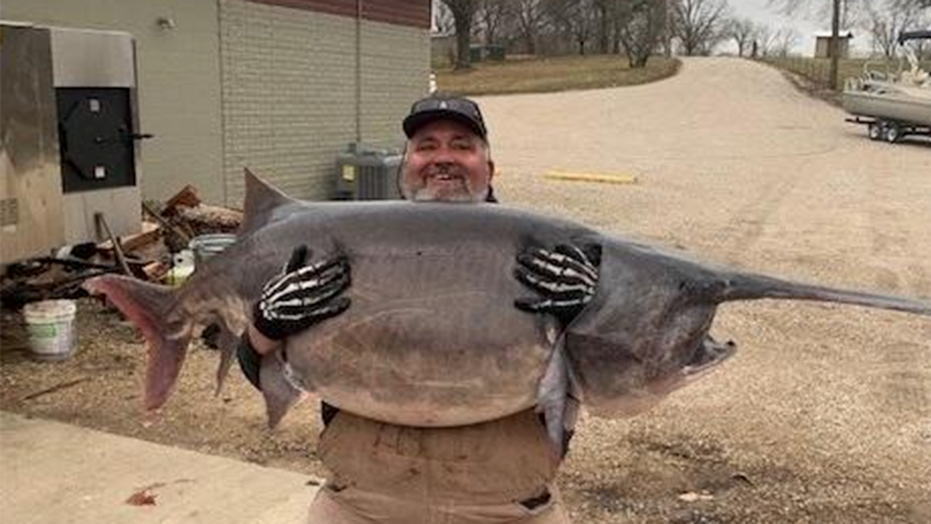 Anyone can set a fishing record anywhere.

An angler from Illinois set a new fishing record in Missouri late last week. According to the man who caught the fish, he was on a trip with his family when he set the new record.

Jim Dain caught a 140-pound, 10-ounce paddlefish during a trip to Lake of the Ozarks, according to the Missouri Department of Conservation. Dain said that inclement weather almost caused him to cancel the fishing trip, but he ended up going out anyway.

Jim Dain caught a record-breaking paddlefish during a family trip in Missouri. (Missouri Department of Conservation)

Dain explained, "The forecast was calling for storms, and then it changed to no rain, so we went out, but it just kept getting colder. We weren’t having much luck, but decided to fish for another hour so we took another turn. And that’s when the drag on the reel started. It felt like a tree was on the line!"

When Dain got back to shore with the fish, he met Steven Henson, another angler who holds the state record for the river carpsucker. It was Henson's idea for Dain to get his fish officially weighed.

"He was at the boat ramp and happened to hold a state record," said Dain. "He’s looking at the fish and says to me, ‘Boy, I think you should get that checked out because it could be a state record.’"

After finding a certified scale that could weigh a fish over 100-pounds, it was confirmed that Dain had caught a new state record. After learning the news, Dain made good use of the fish.

"We got 16 one-gallon bags of meat out of this catch," laughed Dain. "We’ve fried it, grilled it and made paddlefish tacos the other night. We’ll be having paddlefish for a while!"