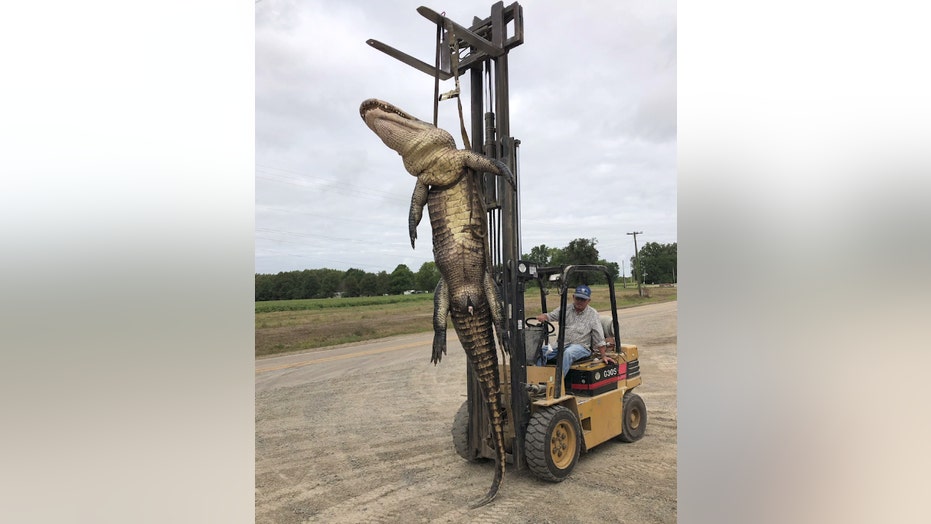 Are we sure this is an alligator and not some new species of Godzilla we should be concerned about?

Travis Bearden shared the news to Facebook on Saturday, when he revealed that the alligator weighed in at 800 pounds. He also thanked his family and friends for supporting him in his quest to break the current record.

Arkansas' Game and Fish Commission said they only record length, and not weight, but confirmed that Beardon's catch was the longest in state history. (Travis Beardon via TMX.news)

Bearden, along with his father, his brother and a friend, caught the gator during a Saturday outing at Lake Merrisach, near the state’s eastern border. As he told KFSM-TV, he had been hunting in the waters with a permit that was good for only two weekends — and on the second weekend, he spotted the soon-to-be record-breaking gator.

“We weren’t real sure how big he was when we spotted him, and to our surprise after we harpooned it, it ended up being a giant!" Bearden told KFSM-TV, adding that the gator dragged them around the lake for two hours.

An official with the Arkansas Game and Fish Commission later declared the gator to be the longest ever caught in the state, although he admitted that the state doesn’t keep track of “official” state records for alligators — only a record of their lengths.

The previous record for longest alligator, per the Encyclopedia of Arkansas, measured 13 feet, 10 inches, and weighed 1380 pounds. (Travis Beardon via TMX.news)

In any case, Bearden is thrilled with his catch.

“I’ve got to give a shout out to everyone that played a huge part in me being able to harvest such a Giant,” he wrote on Facebook. “God for blessing me with the opportunity, my wife for being so supportive of me being gone these last 2 weekends, and all my family and friends for the help along the way! I can’t stop smiling!!!”

The previous record for longest alligator, per the Encyclopedia of Arkansas, measured 13 feet, 10 inches, and weighed 1,380 pounds, as noted by KATV.