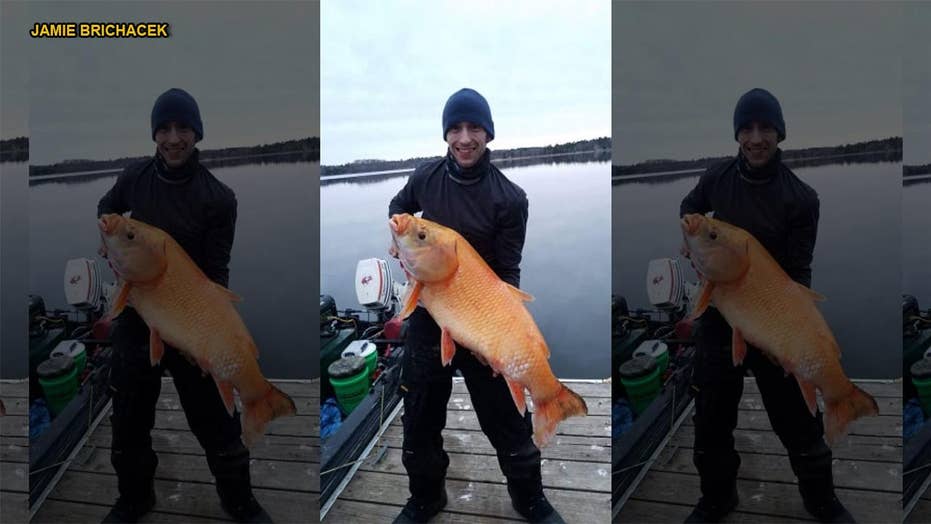 Minnesota fisherman Jason Fugate was stunned to catch a 33.1 pound fish with a unique bright orange color. Following a biologist's inspection, the fish was determined to be a rare buffalofish whose color is a result of extreme age, estimated at being up to 110 years old.

The mystery behind a fisherman’s giant catch has been solved — it’s a very old bigmouth buffalo fish.

Jason Fugate was out bow-fishing with his friend, Jamie Brichacek, in the Brainerd Lakes Area, Minn., in April when he hooked a giant, bright orange fish.

When Fugate got the large fish out of the water, the pair were shocked by the vibrant color.

Jason Fugate was out bow-fishing with his friend, Jamie Brichacek, in the Brainerd Lakes Area, Minn., in April when he hooked a giant, bright orange fish. (Jamie Brichacek)

"I'll be honest: I didn't realize it was orange until I had it in the boat,” Fugate said to Fox News.

"When I first saw it, I thought it was something sunken. As I got up closer it swam and came up a little bit and just had that big glow like it was just a big buffalo fish," Fugate said to Fox News.

The largest in the North American sucker family, buffalofish can get up to 48 inches and around 40 pounds. The one Fugate caught clocked in at 38 inches and 33.1 pounds. However, the common freshwater fish is usually light in color.

When Fugate pulled the large fish out of the water, the pair were shocked by how big and orange it was. (Jamie Brichacek)

"But when I saw the first pictures that Jason sent me I was actually pretty shocked because it was a bright, vivid orange," said NDSU Biologist Dr. Alec Lackmann to KSTPTV. "I had never seen something like that all across the entire body of the fish."

"When I took this picture I realized I did something pretty cool," Fugate told Fox News.

After Lackmann removed the otolith – ear stones found in the head of fish that can provide an age range – he determined the fish to be very old, which he hypothesized might be the reason for the bright orange coloring.

"And it might have just accumulated a lot of things over its lifetime. And that's why it was just so vivid orange like this,” he said to KSTPTV.

The largest in the North American sucker family, buffalofish can get up to 48 inches and around 40 pounds. (Jamie Brichacek)

Lackmann, who has discovered bigmouth buffalo fish up to 110 years of age throughout his career, said this rare fish appears to be one of the oldest ones he has ever seen.

Meanwhile, Fugate, who suffers from Malabsorption Syndrome, tells Fox News he sees the catch as more than just an odd occurrence, but a sign of hope.

"Since it's happened, it's been a token of hope to me and my family."