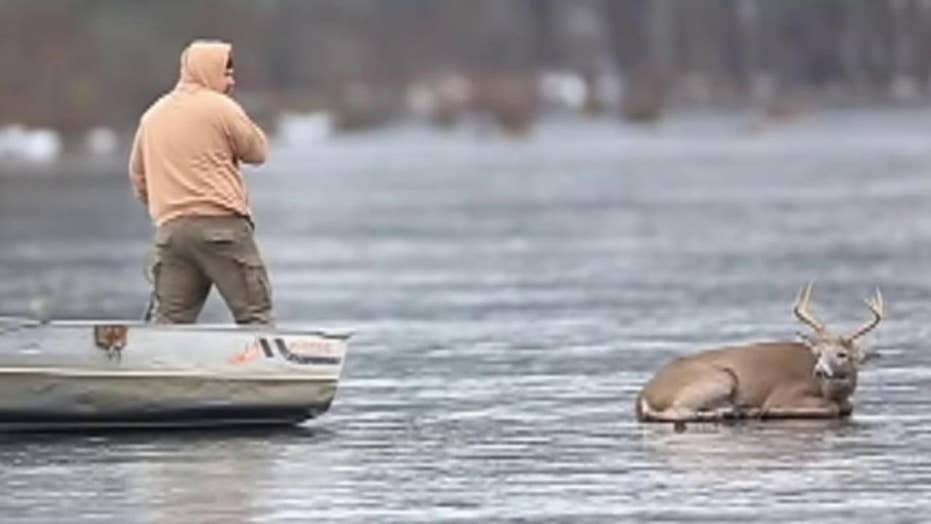 Two hunters rescued a deer stranded on a frozen lake in Pennsylvania — and the dramatic sequence was all caught on video.

Josh Davis and Ed Schmalzle found the eight-point buck laying helplessly on the ice of Greeley Lake “over 100 yards” from shore on Saturday, just two days before hunting season.

The two men didn’t want to see the animal suffer, they said, so they performed a rescue mission to save him.

"He must have made it out that far, slipped and fell, and couldn't get back up," Davis told WNEP.

Schmalzle carefully slid out onto the ice in a boat then tied the deer up with rope and was towed back to land while photographer Jeff Sidle captured the whole thing on camera.

"I wouldn't want to see the deer suffer. I am a hunter. There's a giant difference between an animal being harvested humanely and one being left out to die on the frozen ice," Davis said.

The hunter said that even if someone kills the deer during hunting season, which began Monday, at least it would feed a family instead of going to waste.

"People don't realize that just because hunters go out and kill that they're not humane or they don't have those feelings about animals and the environment. That's the way we are. It captured who we are," Sidle said.