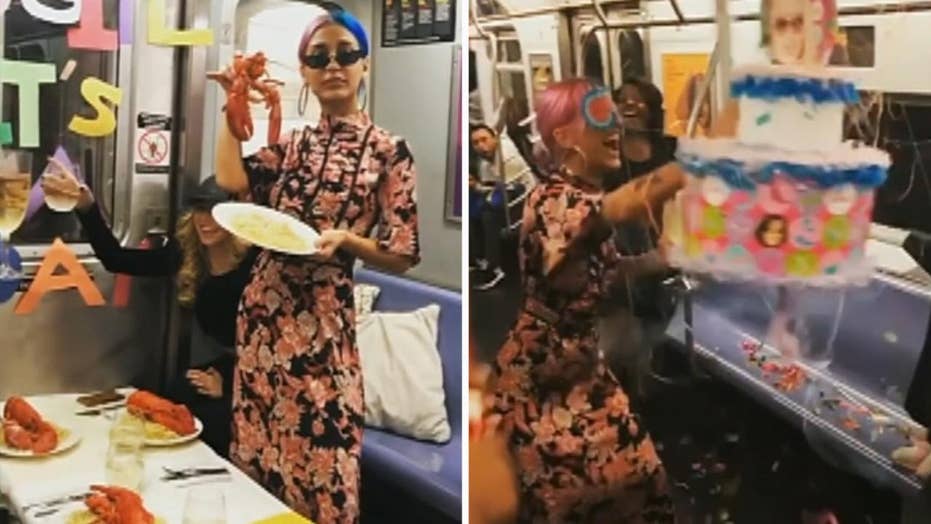 It may not have a Michelin star, but a subway car was a good enough venue for one California woman to celebrate her birthday.

Amber Asaly, her cousin and several other friends were pictured using a New York City J train car line for an impromptu birthday dinner after reservations at a restaurant fell through, she told The Post.

The group boarded the subway at the Myrtle-Broadway stop in Brooklyn at about 10:30 p.m. Wednesday. They assembled a table, hung up streamers and even strung up a piñata, Asaly said.

GET HAILEY BALDWIN'S GLOWING SKIN WITH THESE MODEL-APPROVED PRODUCTS

“Each friend collectively grabbed a bag,” she said of how they got all the festive knick-knacks on the train. “Then we installed the table on the train.”

Then, on a mass transit system known more for dining rats, the group dined on lobster, spaghetti and drank bottles of white wine.

“We all dressed up. We made it like a Michelin-starred restaurant. That was kind of the whole point,” said Asaly, who turned 26 on Wednesday.

Asaly, a Los Angeles-based photographer, added that the straphangers who shared the subway car either ignored them or snapped photos of the party as they smashed a piñata and ate their dinner.

“They were just sitting there, not saying anything,” she said.

She claimed that an MTA worker saw them and let them continue riding.

Asaly said her party rode from Brooklyn into Manhattan, then stayed on the train as it turned around and headed back.

“Just the energy was the highlight,” she said. “It was crazy.”

The MTA could not immediately be reached for comment.