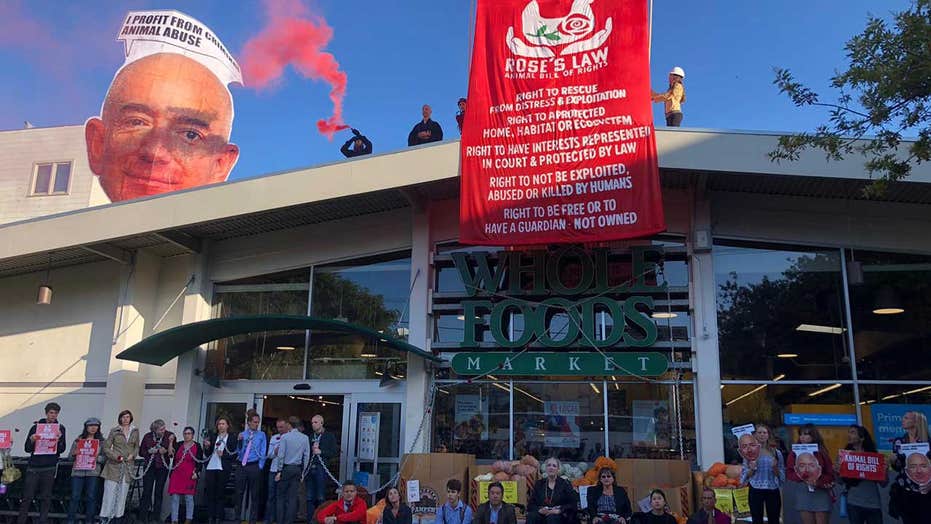 Thirty-seven protesters with Direct Action Everywhere were reportedly arrested amid a protest outside — and on top of — a Whole Foods market in San Francisco on Monday.

The protest, which was staged by animal-rights activists with Direct Action Everywhere, was demonstrating against what the group alleges to be “criminal animal abuse” by farms that supply Amazon, the parent company of Whole Foods. According to a press release shared by Direct Action Everywhere (DxE), the protest was also attempting to raise awareness and support for Rose’s Law, a proposed animal bill of rights supported by animal-rights organizations.

In a statement shared with Fox News on Monday, Whole Foods reiterated its “commitment to animal welfare,” but warned that DxE had potentially created a safety hazard amid the protest.

During DxE’s demonstration, activists chained themselves together in front of the store’s Noe Valley location, with some even “supergluing” themselves to each other, according to DxE. Social media posts from outside the store also show the group had erected a large image of Amazon CEO Jeff Bezos’ head on the roof of the store, with a sign over it reading, “I profit from criminal animal abuse.”

Activists erected a large image of Amazon CEO Jeff Bezos’ head on the roof of the store, with a sign over its head reading, “I profit from criminal animal abuse.” (Direct Action Everywhere)

A live stream of the incident was broadcast on the group’s Facebook page, captioned with the message, “Activists are chaining their necks to the doors of Whole Foods and locking down Amazon, asking Jeff Bezos to support the #RightToRescue animals from factory farms.”

A source from Whole Foods confirmed the store had closed amid the protest, and that all customers and workers were able to safely exit the store. A tweet from someone claiming to be the sister of an employee had previously claimed "a store full of customers and other employees" had been held "hostage" at the location.

In a statement to Fox News, a spokesperson for Whole Foods said the store “respect[s] everyone’s right to voice their opinion,” but felt DxE’s “repeated targeting” of the chain was putting its customers and staff at risk.

"Direct Action Everywhere’s repeated targeting of Whole Foods Market stores jeopardizes the safety of our customers and Team Members, including today at our Noe Valley store," the statement said. "Whole Foods Market caters to customers with a wide variety of diets, and we’re proud to provide transparency in animal welfare and growing practices through third-party certifiers like Global Animal Partnership. Our high-quality standards, including a commitment to animal welfare, have established us as an industry leader for nearly forty years. We respect everyone’s right to voice their opinion, but our responsibility is to provide a safe environment for our customers and our Team Members."

DxE’s protests came after the group claims to have uncovered alleged instances of “cruel conditions” at farms that supply to Amazon and Whole Foods.

In its press release, issued Monday afternoon, DxE also urged Jeff Bezos to “disavow the prosecution of six peaceful activists” who were previously arrested on felony charges for trying to break animals out of some of the farms.

Simultaneously, during Monday's protests, activists with the group were also said to have handcuffed themselves together at Amazon's offices in San Francisco.