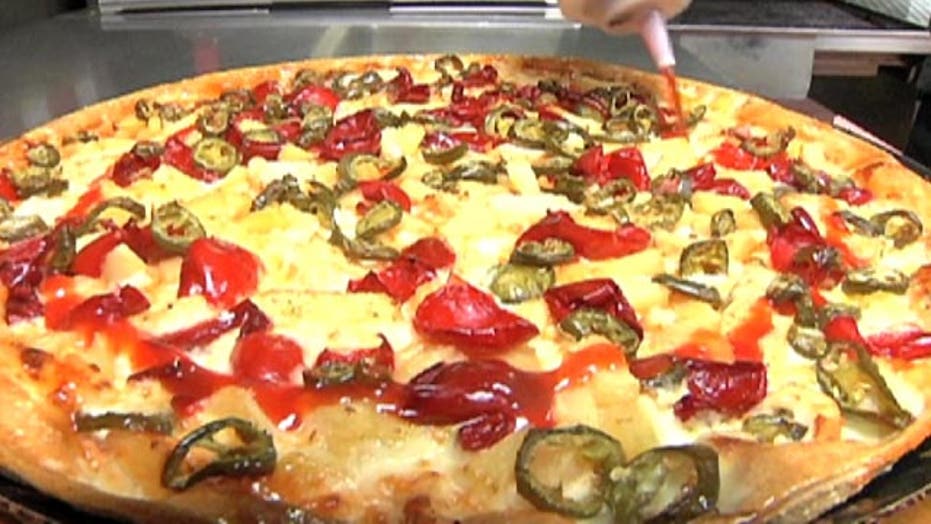 New Pizza Hut menu has HOW many options?

The world's largest pizza chain is now offering pies with ingredients like Sriracha and banana peppers on pretzel crusts and finished with toppings like fresh spinach and a balsamic glaze.

"Spicy to salty, it's delicious," said one Pizza Hut customer after tasting a few.

The new Flavor of Now menu offers 2 billion combinations, says Pizza Hut, and is part of a larger chain overhaul announced in November that executives hope will jumpstart sales.

“This is attracting them to come back or give us another shot,” said Pizza Hut spokesman Doug Terfher. “At the same time our existing customers are able to explore a little bit maybe beyond what they’re traditionally getting from us.”

FoxNews.com got a sneak peek of how Pizza Hut is serving up the near endless combinations--and we got to put some to the taste test.

We started with the new Sweet Sriracha Dynamite Pizza. It’s a pizza topped with Sriracha hot sauce, grilled chicken, sliced jalapeño peppers, sweet pineapple and Peruvian cherry peppers on a  Sriracha crust with a honey Sriracha drizzle.  It’s tasty, but it's got a kick you can’t deny.

Next, we tried out the Garden Party Pizza made with crushed tomato sauce topped with green bell peppers, red onions,  mushrooms, diced Roma tomatoes and spinach. It’s perfect for vegetarians or someone looking for a meal-in-a-box. But if you're a meat lover, it may not be for you.

The key to Pizza Hut’s new limitless menu is its new crust flavors, which can be added to any pizza. We tried two types --Ginger Boom Boom and Fiery Red Pepper -- on the crust of two of the chain’s best sellers: meat lovers and pepperoni.

You might typically associate ginger with Asian food but the sauce actually works on pizza.

“It’s a little crunchy. Not too dense, not too thick,” said customer Sarah Sandoval. “That crust is fantastic. Love that crust.”

Pizza Hut says it created the new menu because the modern customer’s palate is expanding, and the ability to customize is a way to draw in highly-sought-after millennials, who expect options that are a little more gourmet—even healthy.

“As all good companies do, there’s a point where you have to evolve and what we looked at with this opportunity and our new menu was that evolution,” Terfher said.

The Flavor of Now menu is available in restaurants across the country.