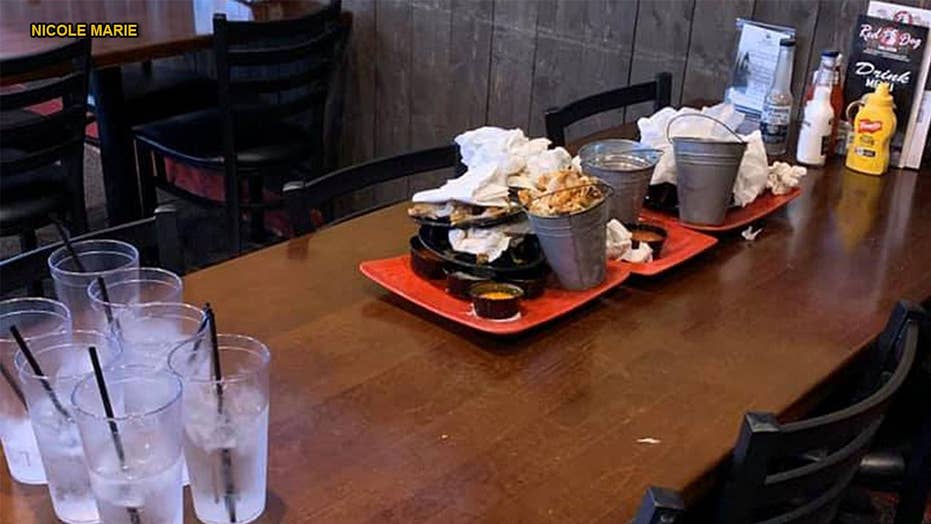 A Michigan waitress says her 'faith' in today’s youth has been restored after a heartwarming encounter with seven young customers. The group of seven 6th grade boys was 'extremely polite,' offered to tip her well and cleaned up their table after eating.

Way to go, moms and dads.

Though the future remains uncertain, one Michigan waitress says her “faith” in today’s youth has been restored after a surprisingly heartwarming encounter with a group of young customers.

Last Friday, a woman named Nicole Marie took to Facebook to relay the feel-good story that happened during her shift that day at Red Dog Saloon in Milford.

Though the future remains uncertain, one Michigan waitress says her “faith” in today’s has been restored after a surprisingly heartwarming encounter with a group of young customers. (Nicole Marie)

“Today my faith in future generations was restored!!” she declared, explaining that she served a group of seven boys from 6th grade, who were quite excited to order wings and asked how much the total bill might be. When questioned regarding their parents’ whereabouts, the boys told the waitress that they were dining alone and had been “looking forward to this for weeks!”

“They were so excited and were EXTREMELY polite the whole entire time, using please and thank you and trying to make it as easy as possible for me to get their order; they even told me they’d tip well,” Nicole Marie said. “One of the boys even told his friend to get off the phone when I was talking to them!”

“It was so heartwarming to see how much they were trying, especially when there were no parents around to scold them if they weren’t on their best behavior,” she gushed. “They were so good that a neighboring customer ended up picking up their tab and telling them to pay it forward!”

An image of the Red Dog Saloon in Milford, Mich. (Google Maps)

“I just wanted to give a big props to the parents of these boys — keep doing what you’re doing!!” the Red Dog Saloon employee concluded. She also shared an image of the boys’ table after the meal and noted that “adults (myself included) rarely leave the table this clean!”

“There’s hope for the future,” one commenter said.

“Those young men have set the standard for how everyone should behave in a restaurant,” another offered.

“Cheers to the parents that raised them. High-five to the kids for listening,” a fan exclaimed.