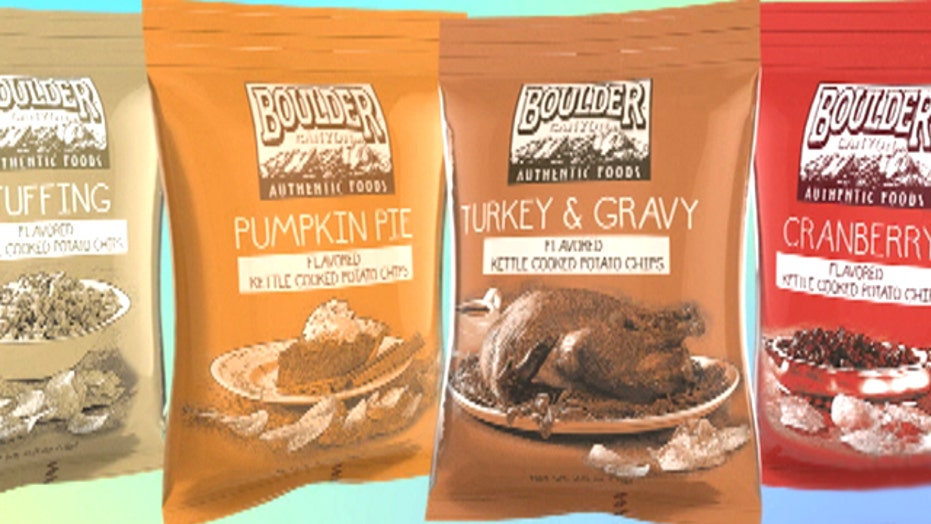 Thanksgiving chips are a meal in a bag

Craving holiday food before Thanksgiving? Just grab a bag of these new kettle chips. There are four meal-time flavors including Turkey & Gravy and Pumpkin Pie

Thanksgiving may be just around the corner but if you’ve got a craving for holiday food, just hit the snack aisle.

Each bag comes with four holiday flavors. There’s Stuffing—which has a heavy onion and herbaceous aroma; Cranberry—a tangy salty twist on the sauce which had many in our office divided; Pumpkin Pie—a sweet and slightly spicy snack that’s a crunchy dead ringer for the real thing. But the favorite was Turkey & Gravy, which has a rich bouillon flavor and a hint of sweet  molasses that mimics a glaze.

Coming up with the right combination took months of research and development.

“We tried so many things so many things that didn’t  really work. Everyone does something different for the holidays so we initially  had eight or ten flavors to narrow down,” Steve Sklar, senior vice president and general manager for Inventure Foods, Inc—the company that owns Boulder Canyon, told FoxNews.com.

“A lot of different seasonings and spices were used in the testing phase but ultimately not everything not every taste translates its flavor profile well to a potato chip.”

After about nine months of working closely with retail partner Target, Boulder Canyon had arrived at their final chip flavors.

If you're feeling really adventurous, try combining two or more flavors at once. But most just to stick to one.

“I love the pumpkin pie. I’ve got a sweet tooth,” Sklar said.