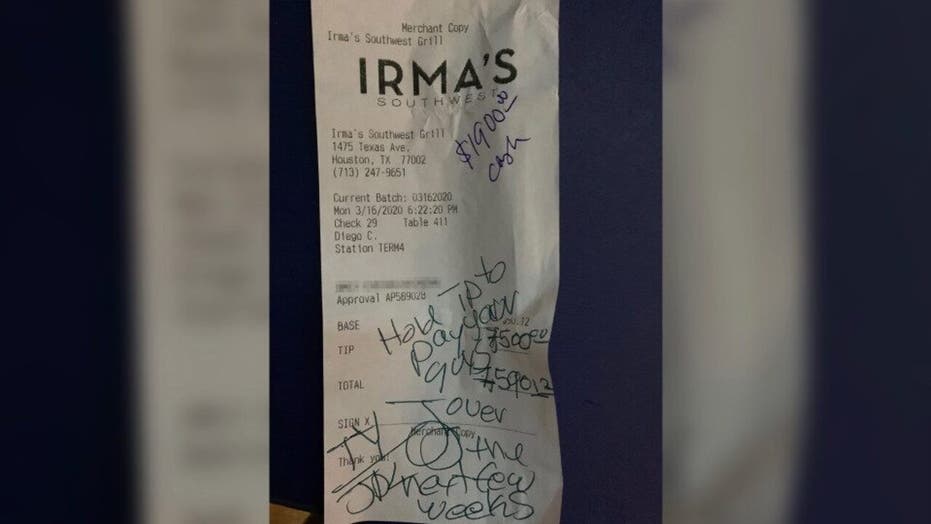 Louis Galvan, owner of Irma's Southwest restaurant in Houston, Texas, talk's about a loyal customer's kind act to soften the blow of mandatory closing due to coronavirus.

A Texas restaurant will be able to breathe a little easier after a customer left an incredibly generous tip Monday evening.

Louis Galvan, owner of Irma’s Southwest in Houston, spoke to Fox News about the unexpected gratuity, and what it means for the future of his restaurant and staff as the coronavirus outbreak continues.

“It was a regular – a regular of the restaurant for about 15 years,” Galvan said of the generous customer. “He came in and had a modest dinner of shrimp tacos and then left a $9,400 gratuity.”

On the receipt, the customer wrote, “Pay your guys over the next few weeks” – which is exactly what Galvan intends to do. (Louis Galvan)

Galvan said that when the unnamed customer came in, a television news outlet was doing a live feed about restaurants and bars in the Houston area being forced to shut down dining rooms because of the outbreak.

“I think he came here just to [give that tip],” Galvan said. “He came down here specifically to do that and wish us the best of luck.”

“Everyone was amazed,” Galvan added.

On the receipt, the customer wrote, “Pay your guys over the next few weeks” — which is exactly what Galvan intends to do.

“Basically we are going to split that among the staff members, not management. So, about 30 people will split the $9,400 evenly,” Galvan said.

But more than just help out the staff during a stressful time, Galvan said it “reinvigorated the restaurant,” which is still open for takeout and delivery.

“Honestly, we were going to close, but now we’re going to try and make the best out of this deal,” he said. “We’re going to make this thing work.”

Though Galvan said he doesn’t know how this situation will continue to unfold, he’s determined to help his restaurant succeed.

“It invigorated us as far as our commitment to the community and commitment to keep our business going. We’re going to grind this out,” he continued.

Those in his community seem as eager to help. Galvan said that since news of the tip began to pick up traction, there was an increase in to-go orders.

“Another regular customer came in and left a $100 tip on a $90 ticket after he saw the report,” he said. “He came in just to purchase lunch and leave another gratuity.”

Galvan is also doing his part for his community at large by taking food to people who work nearby and do not have other food options.

“We’re not even charging for some of the meals,” he said.

Though it is a scary time for small businesses and restaurants, Galvan said he’s seen more community than competition with others in the same industry, and says he hopes to continue to help.