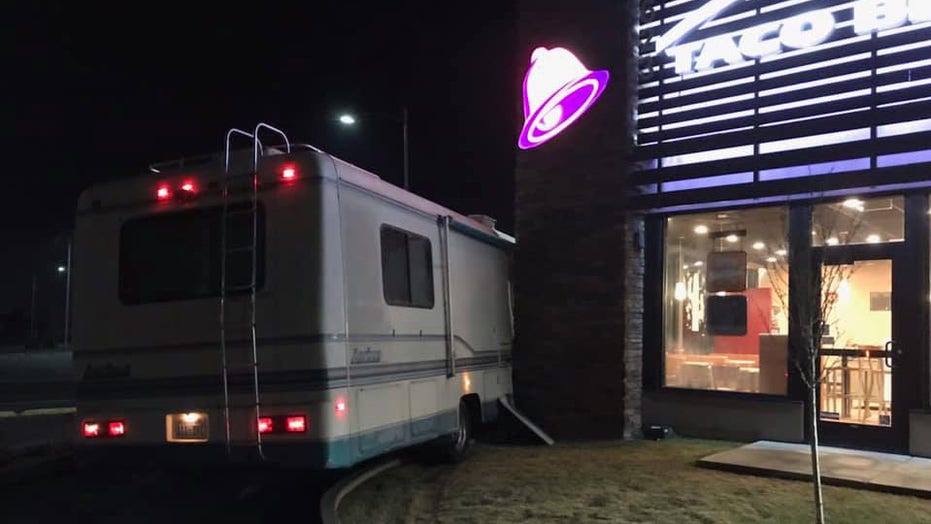 Sometimes it’s better to skip the drive-thru and just order from the counter.

A woman in Kennewick, Wash., was arrested on Friday after she got her RV stuck in a Taco Bell drive-thru. Police took her into custody on suspicion of driving under the influence.

On top of getting the vehicle stuck, the woman also entered the drive-thru lane through the exit and was driving the wrong way.

The Kennewick Police Department shared photos of the RV on their Facebook page, which clearly shows the vehicle facing the wrong way after seemingly entering through the exit.  It appears that the large vehicle got stuck trying to make a tight turn around the corner of the restaurant.

MCDONALD'S CUSTOMER ARRESTER FOR PUNCHING WORKERS: 'YOU GOT MY ORDER WRONG'

Police identified the driver as 56-year-old Anastacia M. Etzwiler. She was taken into custody and booked at the Benton County Jail, Fox 5 reports.

Authorities captioned the photos, “Shortly after midnight, officers responded to a call of an RV stuck in the drive-thru of Taco Bell on Plaza Way. The RV had been driven into the drive-thru the wrong way to begin with. The driver, Anastacia M Etzwiler, age 56, was suspected of driving under the influence. She was arrested and booked into jail.”

The RV seemingly got stuck as it attempted to make a tight turn in the drive-thru lane. (Kennewick Police Department)

Despite the serious nature of the allegations, users on Facebook still found humor in the situation. One user joked about her driving the wrong way, posting, “Well you see, she went that way because she couldn't get past the height limit bar.”

Another user joked, “Hope she got her Tacos, I heard the food is not so good at the Benton Hilton” (aka the county jail).