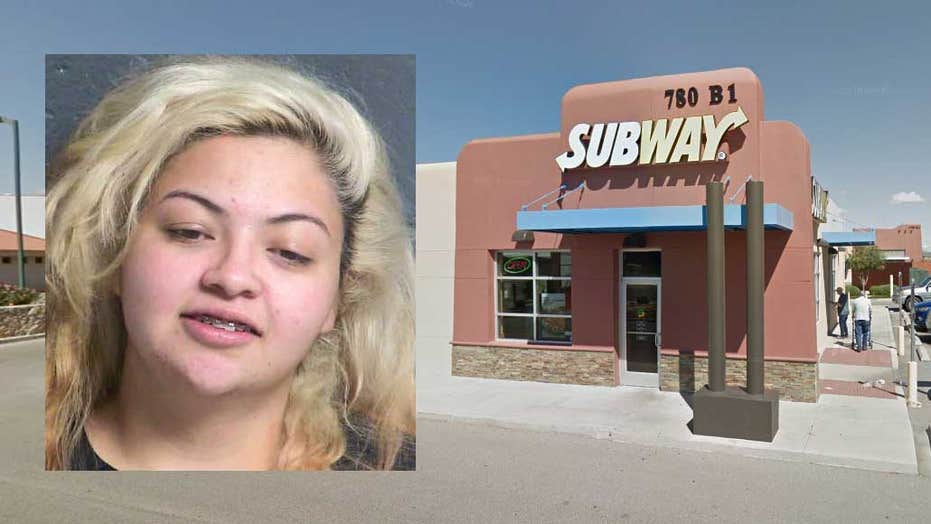 She went from “sandwich artist” to con artist.

Police in New Mexico arrested a Subway restaurant employee in Las Cruces after she staged a robbery in her own shop, allegedly because “she wanted to teach one of the employees a lesson.”

Lorena Ariana Marin told officers she staged a robbery at the Las Cruces Subway where she worked in order to "teach one of the employees a lesson about what could happen late at night in that part of town." (Dona Ana County Detention Center (inset); Google Maps)

Lorena Ariana Marin, the Subway employee, and her alleged accomplice, Angelo Rey Espinosa, orchestrated the fake robbery on Monday, bursting into the store with masks over their faces. Marin, 22, then hopped over the counter and began “verbally and physically” threatening the two on-duty employees while Espinosa, 19, stood by.

“The woman also ordered one of the employees to get rid of the customer at the drive-thru window,” the Las Cruces police wrote on Facebook.

Marin and Espinoza soon herded the two employees toward the back of the store, at which point one of the employees “bolted” out of the eatery and made it to her car.

Police caught up with Marin and Espinoza “within minutes” of the crime after a citizen reported seeing a suspicious vehicle parked nearby. Inside the car, officers found Marin and Espinoza. Marin was identified as a possible suspect after one of the Subway employees claimed to have recognized her voice during the robbery.

“Marin acknowledged her involvement in the robbery and indicated she wanted to teach one of the employees a lesson about what could happen late at night in that part of town,” the Las Cruces Police Department said.

Marin and Espinosa were booked into the Dona Ana County Detention Center, where both were initially held without bond. They were due in court Tuesday; a representative for the Las Cruces Police Department was not immediately available to confirm whether the two are still in custody.

A representative for Subway was not immediately available for comment.