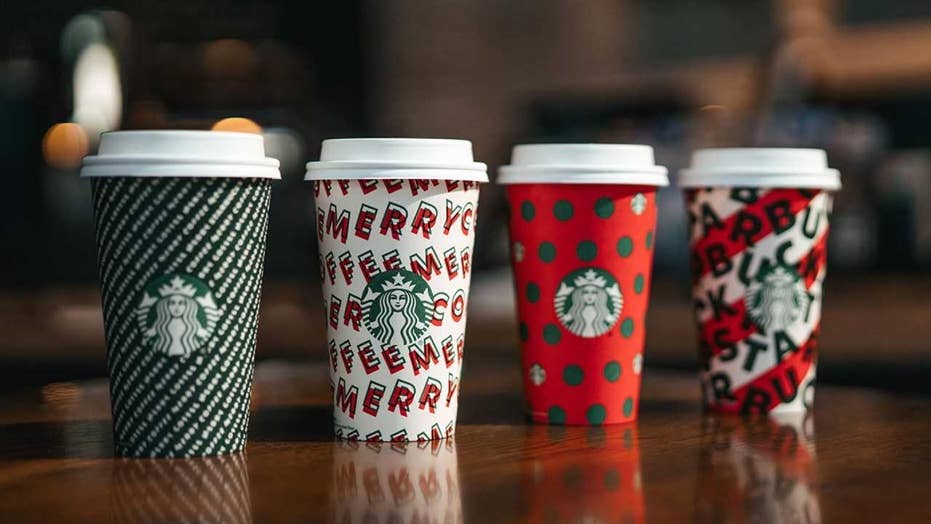 Starbucks' new coffee cups are beginning to look a lot like Christmas - but they don't name the holiday.

The coffee chain is unveiling Thursday four new seasonal cups — and none of them uses the word “Christmas.” The closest it gets are the words “Merry Coffee” on two of the four designs, plus “We wish you a merry coffee,” on a newly designed cup sleeve.

“I’m gonna get a jump start on the Starbucks holiday cup drama by saying that 'Merry Coffee' is the silliest slogan I have ever heard,” one Twitter user wrote.

“Multi-billion dollar corporation and they came up with Merry Coffee. Wow,” another observed.

Starbucks previously faced backlash from Christmas traditionalists when it issued plain red cups in 2015 and the “Symbol of Unity” cup in 2016, just a week before the presidential election. Recent years have seen holiday-colored pattern designs. A Starbucks spokesperson told Fox News the slogan is not an effort to avoid mentioning Christmas.

"During the holidays, Starbucks aspires to spark mini moments of joy in our customers when they visit our stores, making their day even more cheerful and bright," the spokesperson said, noting that Starbucks offers a "Christmas blend." "'Merry coffee' is a fun and festive expression that we hope our customers feel as they take the very first sip of their favorite Starbucks holiday beverage."

The spokesperson added that Starbucks stores will be decorated during the holiday season with Christmas colors and candy cane ribbon.

"We honor the Christmas season each year in a variety of ways including the return of customer-favorite Starbucks Christmas Blend, back for its 35th holiday season, Starbucks partners proudly wear their red aprons, holiday music is heard in stores and holiday gifts and Starbucks Cards line our shelves," the spokesperson added.

Whether an aversion to using the word “Christmas” extends beyond Starbucks is difficult to measure. But in 2017, President Trump tweeted on Christmas Eve that Americans were “proud to be saying Merry Christmas again,” since he took office.

“I am proud to have led the charge against the assault of our cherished and beautiful phrase,” he wrote. “MERRY CHRISTMAS!!!!!”