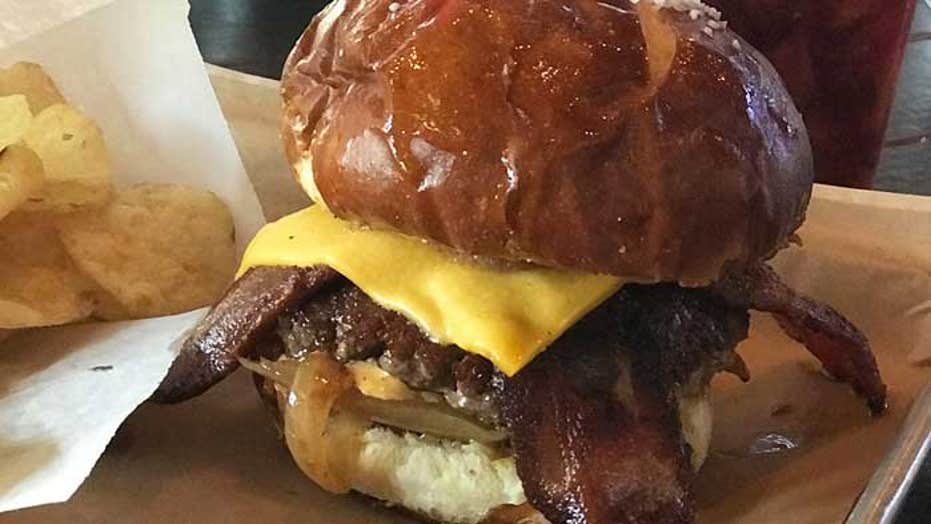 McDonald's to test a meatless burger

The owners of a restaurant in Minnesota claim they’ve been seeing an “influx of pregnant women” ever since news of their alleged “Labor Inducer” burger started making headlines across the state.

The owners of The Suburban, in Excelsior, Minnesota, say that between one and three pregnant customers have been stopping in per day since the beginning of last week, when the burger’s purported labor-triggering properties were made public.

CHEF SLAMS DINER WITH 'INCREDIBLY RESTRICTED' DIET: 'WE LOOK FORWARD TO NOT FEEDING YOU'

Co-owner Ashley Berset told Fox News it all started back in April, when Enrique, the chef at the restaurant, was experimenting with recipes for the then-upcoming Twin Cities Burger Battle, and offered samples of his newest creation to co-owner Kelsey Quarberg, who is also Berset's sister.

Sam, seen here at The Suburban, was the first of two babies born to mothers who chowed down on the restaurant's "Labor Inducer" burger. (Ashley Berset)

“My sister, Kelsey, was nine days away from her due date with her first child and liked the sample so much that she ordered a full-size one as well,” Berset told Fox News. “About seven hours later she went into labor with her baby Sam.”

Berset said the burger became known as “The Labor Inducer,” and was added to the menu after it took third place at the Burger Battle.

“We had the burger available at the restaurant all summer and that’s how the second baby was born,” Berset said, remarking on another little girl who was birthed within hours of her mother eating a burger.

Now, Berset said, pregnant women in the Twin Cities area are flocking to the restaurant for a taste of the burger, which features an angus beef patty, honey-cured bacon, peach caramelized onions, spicy mustard and Cajun remoulade on a pretzel bun.

So far, however, only two babies have been birthed to mothers who recently ate the Labor Inducer — at least as far as Berset knows.

“So far no further reports of babies being born, but I doubt their first thought after giving birth is to contact The Suburban,” she said. “So we will continue to wait and see!”

Certain foods, spicy foods in particular, have long been thought to help induce labor — as evidenced by the similar 2017 tale from patrons of a North Carolina restaurant, who believed that its spicy Buffalo Wing Pizza helped induce labor. Experts, meanwhile, say there’s no evidence that any specific foods have the power to bring on a baby.

In 2013, midwife and certified nurse Michelle Collins told Fox News that while vinegars, spices, or certain foods like eggplant or pineapple have been rumored to induce labor, there’s no scientific data to suggest that eating them actually works. On the other hand, she says that bromelain, an enzyme found in pineapple, can “ripen the cervix” to increase the chances of a successful vaginal birth, though one would have to eat large quantities, and only with a doctor’s approval.