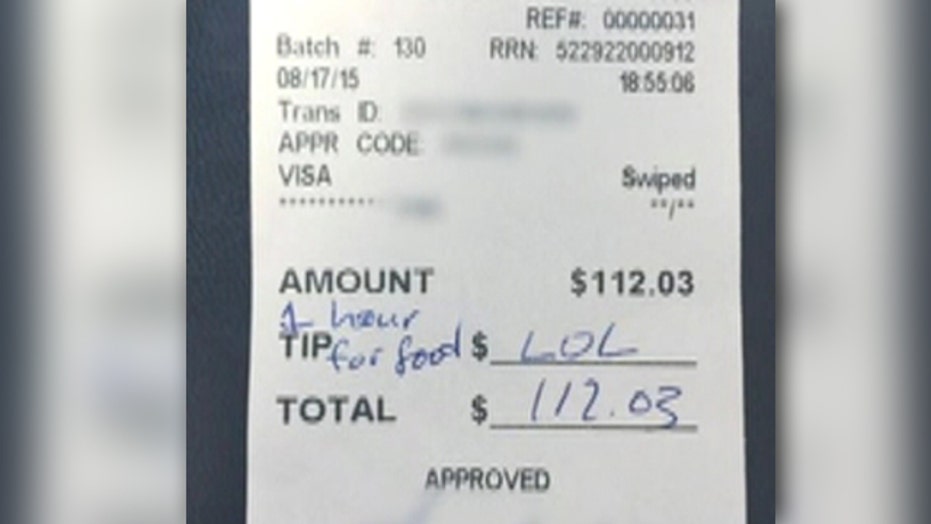 Christmas came early for an expectant waitress in Arizona when she was gifted a very generous tip.

Sarah Clark, a server at the Pita Jungle in Phoenix, is nine months pregnant and her fiancé is scheduled to have knee surgery this week. On Saturday, a couple Clark had served before stopped by for a meal-- and left her a $900 tip on top of the $61.30 bill. The server says she was over the moon with gratitude

“I couldn’t believe what I was looking at first because it was such a high amount — $900 is a lot of money,” Clark told CBS 5 KPHO in Phoenix. “And it took a while for it to set in, and once it did, I cried for a little while.”

Clark will go on maternity leave in early January, and with her husband not working, she says the money is much needed.

“You always hear about these things happening, but you never expect to be the recipient of it,” Clark said.

The customer that left the tip, who is also pregnant, left a note on the receipt saying, “This is God’s money – He gave it to us so we could give it to you. God bless.”

“I had talked to her in the past about my fiancé being injured and him being out of work, and me taking leave, and I think it was just a really amazing token of generosity,” Clark said.

Here's a tip: South Carolina waitress alleges couple admonished her for working outside the home

Clark has worked at the Pita Jungle for seven years, and says her customers have always been generous.

“I don’t know if she really understands how much this is going to help us this season,” Clark told KPHO. “Me being on maternity leave and him being out of work [while recovering from the surgery], we’re not going to be making any income. So this is really going to help with rent and other bills and things like that.”