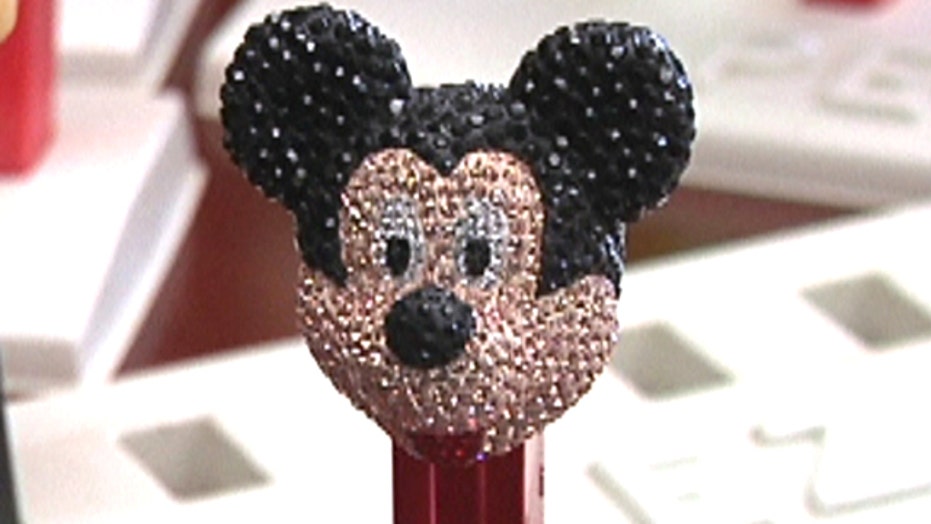 Pez’s popularity has serious collectors willing to shell out big bucks for the miniature marvels.

Listen up all you Muggles and Pez heads.

"I’ll give you one for 2015," speaking about which new Pez dispensers are on the horizon. "It’s taken me about five years to get it. And that’s Harry Potter."  He didn't detail what it would look like.

It typically takes about a year and a half and lots of planning to bring the 6.5 inch dispensers to life. From Mickey Mouse to Santa Claus and Darth Vader in between, the list of larger-than-life characters immortalized by the company is long.

Vittoria says they’ve already begun designing the Harry Potter dispensers.  Like other limited-edition sets, all 250,000 of the dispensers designed like the boy wizard will be numbered.

Pez also piqued the interest of collectors when it collaborated with John Ratzenberger to create set of custom Pez dispensers to celebrate all of the Pixar characters voiced by the actor, better known as Cliff from "Cheers."

“We are selective in that we try to create pieces that are fun; pieces that you’ll remember," says Vittoria.

Other popular collector sets have included Star Wars, Lord of the Rings and most recently, the U.S. presidents, each of which Vittoria had a hand in brining to life.

“It makes me feel like I am a kid again. It also gives me a sense of being part of history at the end of the day,” he says.

Vittoria, who took the CEO reins in 2004 ago after trying and failing to buy the company outright, has turned the North American headquarters in Orange, Conn. into a mecca for Pez pilgrims. He opened a visitor’s center in 2011, complete with a viewing area onto the factory floor and the world’s largest Pez dispenser.

Pez, short for the German word “pfefferminz” or peppermint in English, was first introduced in Austria by Eduard Haas, III in 1927 as a breath mint for adult smokers. The “headless” dispenser was patented in 1948.  The privately-held, family-owned company ships about 100 million dispensers to more than 80 countries around the world. It’s most popular in the U.S., where Americans eat more than 3 billion of the tiny “bricks” of candy annually.

But according to Pez collector Shawn Peterson, the candy and its dispensers didn’t take off in the U.S. until the 1950s.

“Somebody in marketing said, you know what let’s change it from peppermint flavors to fruit flavors and put a cartoon head on it. This is something kids would like,” he says.

Peterson, who has written three books about Pez collecting and now oversees the Connecticut visitor center, says his passion for the novelty item began 25 years ago when he began grow his collection of dispensers at weekend flea markets. Peterson owns nearly all of the memorabilia on display in the nearly 6,000ft shrine to the miniature marvels--which are on display in case upon case.

“I lost count many years ago. It’s thousands of dispensers. I can at least say that everything that was offered at retail. I at least have an example of it.”

He points to the 2012 sale of a rare Democratic donkey and Republican elephant that a private collector bought for a reported $20,000. He says only three of the donkey dispensers, originally created as part of a larger set as a gift for President Kennedy in 1961, are known to exist.  The set is reportedly in Austria, but hasn’t been seen since.

If someone happened to find what Peterson calls "the holy grail for collectors?" "I could see (it going for) $25,000 plus. All it takes is two people getting into a bidding war and the sky’s the limit.”

And just like high-end design brands, such as Louis Vuitton, people are finding ways to make a quick buck off of counterfeiting the novelty item. For example, a clear, gun-shaped dispenser from the 1950s that sold in 2006 on Ebay for about $13,000 ended up being a fake.

Pez executives says while they're flattered, they go to great lengths to protect the brand because it's one of a kind.  “We really don’t have a competitor, we are unique in what we do. There are other products but nothing works or operates or is shaped like a Pez dispenser," Peterson says.

While touring other displays at the visitor center, it’s easy to see the evolution of the dispenser’s technology.  From its original basic flip head to the more recent removable car model, it’s clear that Vittoria has something a little unexpected up his sleeve for the company’s future.

“We would love to build a Pez phone that is a smart phone or a nice unit that is a small computer chip when the technology is right, and I think it’s real close.”

Could Apple have a little competition from a candy company?

But Santa Claus and Harry Potter aside, it seems that even saving your run-of-the-mill plastic Pez dispenser may pay off.

"In 30 years from now you’ll say, 'Gee, I’ve got that piece, let me see if I still have it.' And lo and behold it’s worth a few thousands dollars,” says Vittoria.