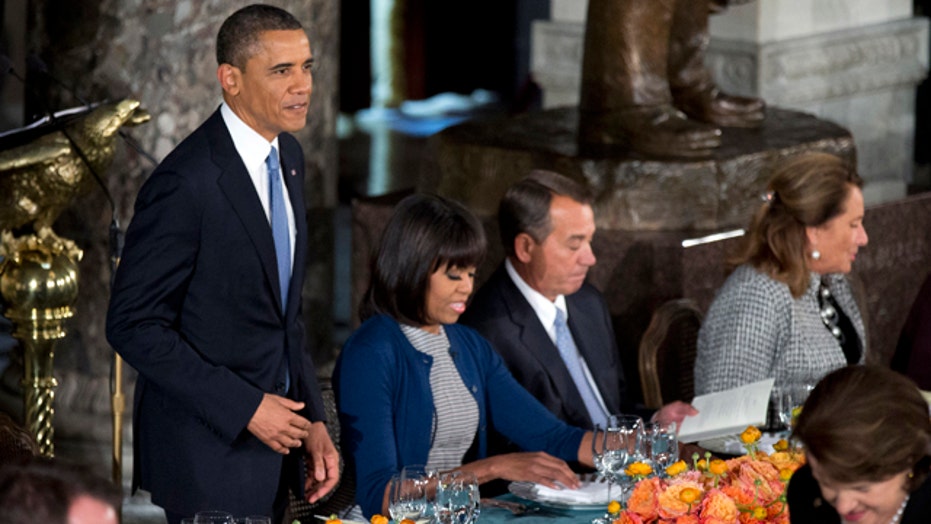 After President Obama's public oath of office Monday, the focus will quickly shift from the speeches and what Michelle is wearing to the food.

The menu is an exclusive surf and turf that includes lobster in clam chowder sauce, grilled bison and apple cake with homemade ice cream.

The meal's three courses, if you eat the whole thing, clocks in at 3027 calories, minus the booze.  While it still contains less than the whopping 3,120 calories in The Cheesecake Factory's heart-stopping Bistro Shrimp Pasta that won this year's Xtreme Eating Awards, the decadence of the Inaugural Luncheon has raised a few eyebrows.

CalorieCount.com is a registered dietitian Rachel Berman who analyzed this year’s Inaugural Luncheon menu and came up with its nutrional statistics. “It’s OK to indulge every once in awhile and if the Presidential Inauguration isn’t a special, celebratory occasion to do so, I don’t know what is,” she told the DietsInReview website. “However, in light of the first lady’s obesity initiatives and the fact that the menu was made public, it was definitely a missed opportunity for nutrition education, for example, to offer lightened-up recipe alternatives (even if just on the website).”

Here's how the meal breaks down:

You can find more information on the meal, including the recipes here.