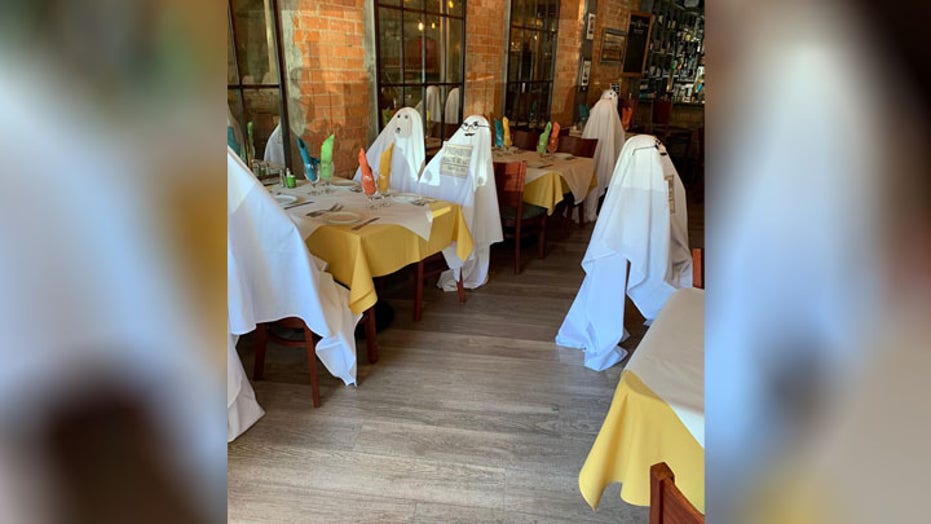 While restaurants across the country are starting to reopen, many still have to make sure that customers stay a safe distance from each other. Businesses are handling this problem in various ways, including one restaurant that’s filling empty seats with ghosts.

While the restaurant could have just removed tables to keep customers apart, Cutraro wasn’t a fan of that idea because it left the restaurant looking too empty. (Trattoria Da Luigi)

Trattoria Da Luigi in Royal Oak, Mich., is making sure customers don’t sit down in a dining room full of empty seats, Fox 2 Detroit reported. Luigi Cutraro, the restaurant’s owner, credits his wife with coming up with the idea.

MAN IN HORSE-DRAWN CARRIAGE KICKED OUT OF KFC DRIVE-THRU

While the restaurant could have just removed tables to keep customers apart, Cutraro wasn’t a fan of that idea.

“When you remove a table, it’s like someone comes into your house and there are two chairs instead of a whole living room,” he told the news outlet.

Luigi Cutraro's son, Luca, spoke with Fox News and said that the ghosts have been met with a very positive response. (Trattoria Da Luigi)

He also explained that shutting down the restaurant during the lockdown was the toughest three months of his life. When he found out he could reopen, it was great news, he said.

“I felt like, you know, you see those movies of the people in the desert and they see an oasis, they see water? That’s how I felt,” he told Fox 2 Detroit. “I felt beautiful because we do need contact with people.”

Luigi Cutraro's son, Luca, spoke with Fox News and said that the ghosts have been met with a very positive response.

"It’s definitely put a smile on people's faces after three terrible months," Luca Cutraro said. According to him, the idea was inspired by a trip to the city's downtown area during the lockdown, when the Cutraro family noted that the city looked like a ghost town.

While the ghosts aren't a permanent addition, Luca Cutraro said some may be kept to remind the family business of how they came together during the coronavirus pandemic, when things were at their worst.