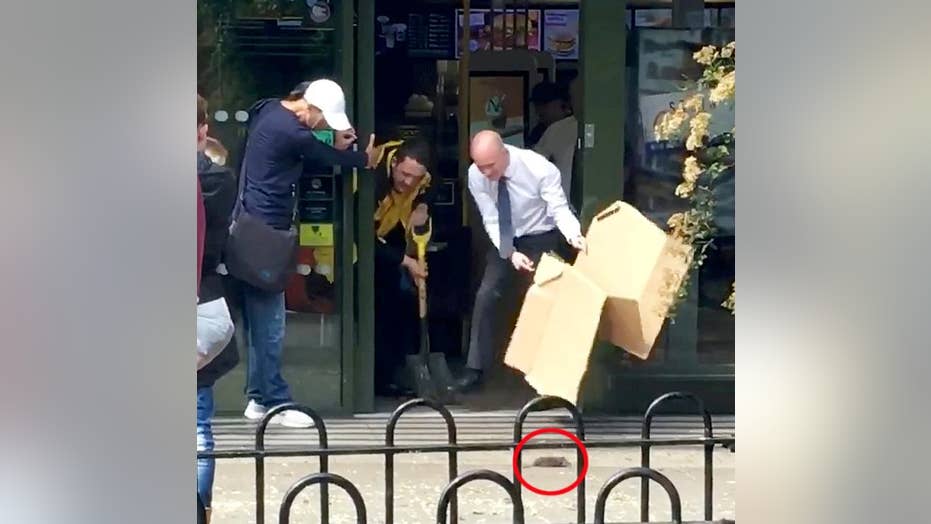 The restaurant shut down briefly as staff members searched for the rodent. Once the animal was tracked down, it was tossed back onto the streets.

McDonald’s employees forcefully ejected a rowdy rat from the restaurant’s dining room using nothing but a cardboard box and a shovel.

The incident reportedly occurred around 10:30 in the morning on June 3 in Rotherham, England. The rodent apparently ran in through the front door, only to be met by shrieks from surprised customers.

Two employees were filmed using cardboard and a shovel to chase the rat out. (SWNS)

A witness filmed the incident and uploaded the footage to social media, SWNS reported. A manager can be seen using a cardboard box to try and guide the rat out before another employee appears and uses a shovel to force it outside.

The restaurant then closed down for a short period of time to clean the affected areas. An Environmental Health Officer reportedly cleared the restaurant in their handling of the situation.

Joanne Bamforth filmed the incident and uploaded it to Facebook. She told SWNS, “I saw a commotion in the doorway of McDonald’s in Rotherham town center this morning. So I stood back and as the staff and managers of McDonald’s were running around in the doorway, I asked a young lady what all the fuss was about. She said, they were trying to catch a rat, it was at that point I got my phone out and video what was happening. Everyone stood around screaming and to be fair I was also a little bit shaken.”

In a statement obtained by SWNS, a spokesperson for McDonald’s said, “Hygiene and cleanliness is of the utmost importance to us. Unfortunately, this morning a rat ran through the front doors of the restaurant, however, it was quickly contained in a small area next to the doors and removed.”

“The restaurant was very briefly closed while the issue was being dealt with and the appropriate area was cleaned,” the statement continues. “The Environmental Health Officer was immediately called and was happy with the way the situation was handled. This issue did not in any way affect the kitchen or areas in close proximity.”