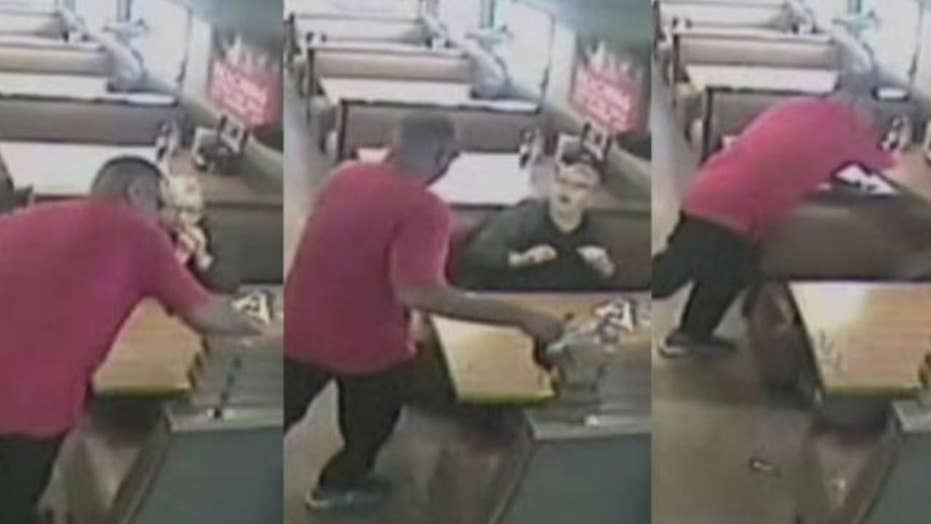 WATCH: Security footage of a terrifying attack inside an Arizona IHOP was released by Phoenix police following the assailant's arrest. Surveillance cameras were rolling when Joe Ernest Meza attacked a pair of women seated at a table with a metal coffee pot. Meza has been charged with theft and multiple counts of aggravated assault.

New surveillance footage of a man’s violent outburst in an Arizona IHOP has recently been released, showing the aggressor whacking customers over the head with a metal coffee pot.

Security footage of the terrifying attack that police said was carried out by Joe Ernest Meza was released earlier this week, KTAR reports. The incident occurred on Sept. 29 at IHOP’s Phoenix location near 51st Avenue and Interstate 10 around 3:30 p.m.

In the clip, Meza could be seen lifting a coffee carafe from the table and whacking a seated woman over the head with it. He proceeded to hit her dining companion with the coffee pot as well, per KTAR.

New surveillance footage of a man’s violent outburst in an Arizona IHOP has recently been released, featuring the aggressor whacking customers over the head with a metal coffee pot. (Phoenix Police Department)

Horrified patrons, including a woman with a baby, quickly scattered from the area. An additional camera captured another customer cowering in the kitchen of the pancake house behind an employee.

Horrified patrons, including a woman with a baby, quickly scattered from the area. (Phoenix Police Department)

An additional camera captured another customer cowering in the kitchen of the pancake house behind an employee. (Phoenix Police Department)

Police soon captured Meza, who was found running through a nearby parking lot with stolen credit cards and a passport, seized from the victims, according to ABC 15.

Meza faces two counts aggravated assault, two counts of assault with intent to injure, as well one count each of theft and disorderly conduct, per KTAR.

The 47-year-old has an extensive criminal past, including arrests for assault, criminal damage, burglary and theft, court records show. A police report details that Meza is a veteran who suffers from mental health issues.

An image of Joe Ernest Meza, who reportedly attacked customers in an Arizona IHOP in September. (Maricopa County Sheriff's Office)

He is currently out on bail, according to ABC 15.

Commenting on the incident, Donna Leone Hamm, the executive director at Middle Ground Prison Reform in Tempe, said that the incident exemplifies how the prison system can fall short of helping individuals who suffer from mental illnesses.

An image of the Phoenix IHOP where Meza carried out the attack.  (Google Maps)

"We made a mistake many years ago when we closed down mental institutions and removed a lot of the resources in the community for that net, that safety net before someone fell into the criminal justice system," she said.