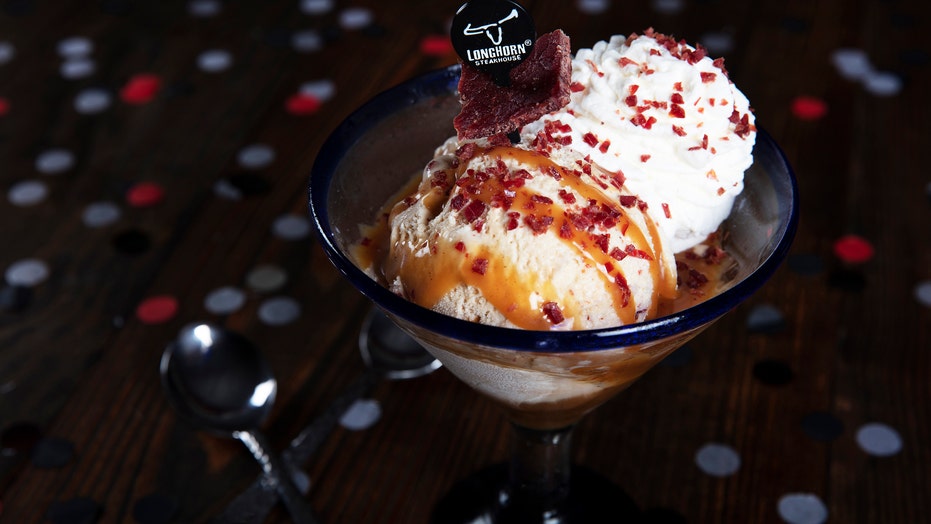 Steak is great, and ice cream is great, so why not put them together?

OK, that might sound like a strange pairing — but LongHorn Steakhouse is giving it a shot. The restaurant chain is introducing its newest dessert, "Steak and Bourbon Ice Cream," and it's pretty much exactly what it sounds like.

Do steak and ice cream work well together? (LongHorn Steakhouse)

According to LongHorn’s press release, this sweet-and-savory dessert will be the only time that they ever serve frozen steak at their restaurants.

"Beginning July 1, LongHorn Steakhouse’s steak-lovers can dig into a first-of-its-kind dessert — a boldly seasoned Steak and Bourbon Ice Cream featuring bits of steak and swirls of bourbon caramel in every spoonful," an announcement reads.

And if you’re wondering why steak and ice cream aren’t combined more often, well, there might be a reason for that — it's an acquired taste.

We got a chance to sample the strange item ahead of its July 1st debut. (Though, in the interest of fairness, we must admit we did not sample the steak-ified sundae at a LongHorn location, but rather at Fox News headquarters, where we assembled it ourselves.) The ice cream itself contains ripples of bourbon caramel and bits of steak (yes, you read that right). It’s also flavored with LongHorn’s char seasoning and is topped with more bourbon caramel, whipped cream and, of course, more steak bits.

Cold steak and ice cream. The bourbon caramel is very nice, however.

Granted, the sample we were sent did not include the whipped cream, forcing us to judge based solely on the ice cream, the steak bits, the sauce and the seasoning,

At first, I was expecting something similar to bacon-topped ice cream — a trend gaining popularity in recent years — which combines surprisingly well when done right. Unfortunately, the steak isn’t salty enough and its natural flavors just don’t sit as well with the sweet ice cream. The char seasoning didn’t bring out any complementary flavors, and almost seemed to make the steak and ice cream feel even more in opposition to each other.

To be fair, one of my other co-workers said she liked it, but it wasn’t an overly enthusiastic thumbs up.

Is it worth trying? Absolutely. It’s an interesting flavor combination, and it’s definitely unique. Give it a shot while you have the chance, and if you don’t like it, just order a steak and an ice cream, and enjoy them both the old fashioned way: separately.