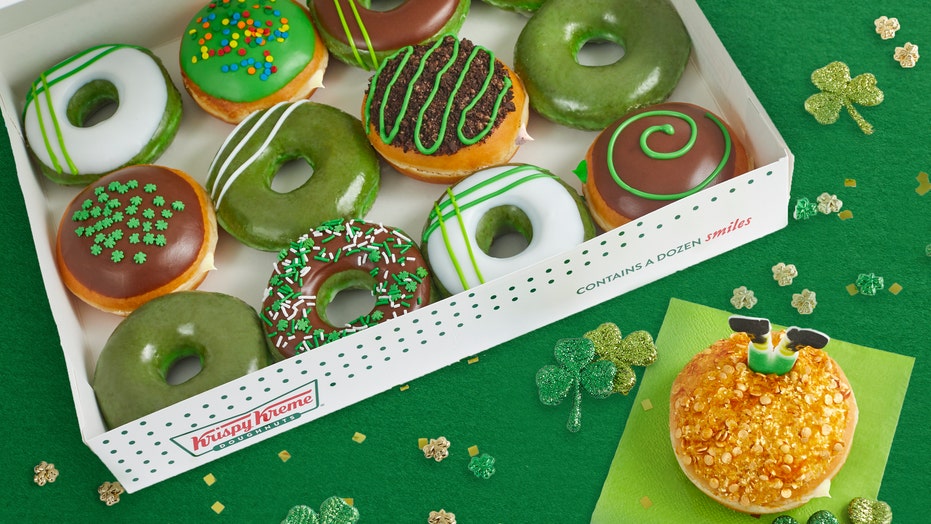 Krispy Kreme is going green for St. Patrick’s Day, in the most literal sense of the word.

Between March 14 and March 17, participating Krispy Kreme locations throughout the country will debut “greenified” versions of the chain’s popular doughnuts, including — but not limited to — its temporarily renamed “O’riginal” Glazed Doughnuts.

In addition to its “greenified” inventory, Krispy Kreme plans to debut an entirely new “Leprechaun Trap Doughnut,” which comes “dressed as a pot of gold” and filled with “Irish Kreme flavored filling.”

“Do you love doughnuts? Leprechauns sure do. They turned all our doughnuts GREEN,” said Dave Skena, the chief marketing officer for Krispy Kreme. (Krispy Kreme)

The idea behind the promotion, according to Krispy Kreme, is that a slew of mischievous leprechauns magically transformed the chain’s offerings ahead of the holiday, and the only way to "trap" those leprechauns was with Krispy Kreme's new "Leprechaun Trap" doughnuts. (As you can see in the photo above, the brand-new doughnut features a pair of Leprechaun legs sprouting from the center.)

“Do you love doughnuts? Leprechauns sure do. They turned all our doughnuts GREEN,” said Dave Skena, the chief marketing officer for Krispy Kreme, in a press release shared with Fox News. “We even caught a few, and if you’re lucky, you can catch one too.”

However, Krispy Kreme warns that its new Leprechaun Trap Doughnuts are only available in very limited quantities, so only a few “very lucky guests” will be able to get their hands on some.