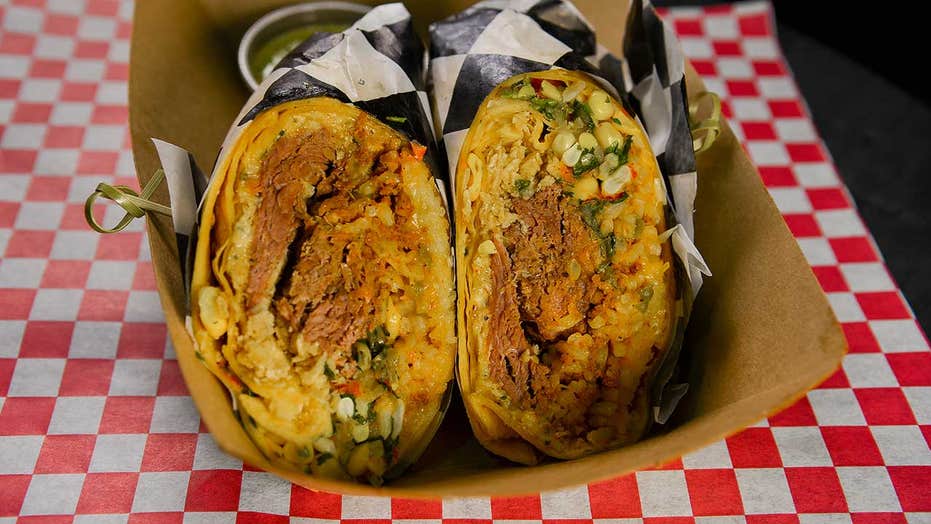 Well, there was at least one definitive winner from the Iowa State Fair.

Amid the campaigning, the politics, and all the presidential hopefuls, the Iowa State Fair hasn’t forgotten to honor its notoriously decadent foods. And this year, the winner of “Best New Food” was bestowed upon a $10 meat-filled wrap from G Mig’s Wrap Stand.

“Georgie’s Roast With the Most,” from the G Mig's Wrap Stand, was declared the Best New Food at the Iowa State Fair. (Iowa State Fair)

“Georgie’s Roast With the Most” features beef pot roast, white rice with chorizo crumbles, roasted green chilies, cheddar jack cheese, corn tortilla crumbles and something called “candy corn salsa” all wrapped up in a generous cheddar tortilla. It also comes with a “sour cream drizzle” and a side of “zesty salsa verde sauce,” according to the Iowa State Fair.

The wrap was chosen from more than two dozen other food items new to the Iowa State Fair this year, among them “bacon-wrapped pig wings” (pork shanks wrapped in bacon and deep-fried), “apple nachos” (cinnamon-sugar chips covered in caramel, apple filling, whipped cream and crushed Red Hots candies) and the “super dog” (a hot dog stuffed inside a hollowed pickle, which is then deep-fried in corn dog batter).

The runners-up for “Best New Food” eventually came down to just three offerings: “Georgie’s Roast With the Most” from G Mig’s; “Chicken Street Tacos” from the Chicken City stand; and “The Chief” from the Rib Shack, which featured Navajo BBQ fried bread around smoked beef brisket (or smoked pork) with a cilantro-lime slaw.

“The Chief,” from the Rib Shack, featuring Navajo BBQ fried bread around smoked beef brisket (or smoked pork) with a cilantro-lime slaw, was one of the two runners-up for Best New Food. (Iowa State Fair)

George Migliero of G Mig’s later told the Des Moines Register he came up with the idea for the “Roast With the Most” after committing himself to pot roast.

“Then I was thinking about other flavors and I kind of went with a little bit of a Southwest (twist), but I know how Iowans sometimes don't like things that are spicier, so I toned it down,” he told the Register, adding that this was the third time being considered for the top three at the Iowa State Fair.

The fair also recognized two other winners, including the Cookies and Cream Wonder Bar (cookies and cream ice cream on a stick, dipped in chocolate and Oreo pieces) which won Best New Deal, and the Cluck ‘n Coop stand, which won Best In Show.

The Cookies and Cream Wonder Bar, from the Wonder Bar, took home the Best New Deal award. The treat is made with cookies and cream ice cream, dipped in chocolate and covered in Oreo pieces. (Iowa State Fair)