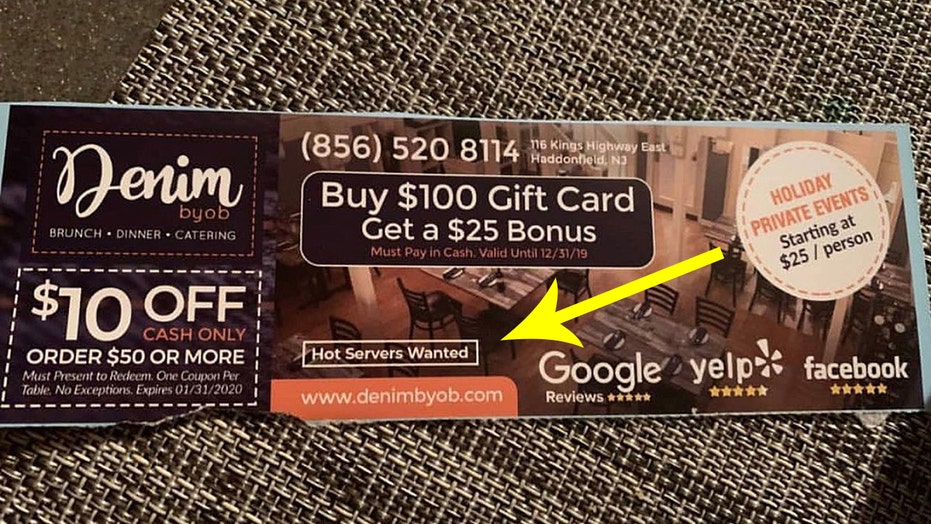 The owner of one New Jersey restaurant is apologizing after 30,000 flyers were recently distributed to locals with a message reading “hot servers wanted.”

On Wednesday, David Murray, the chef and owner of Denim byob, took to social media to apologize for the snafu. The restauranteur claimed that the text on the coupon-style ad for the Haddonfield eatery was supposed to advertise employment for “holiday” — not sultry — servers.

“This is a tough one. To all of our guests or the 30,000-plus of you who received this coupon in the mail please allow us to offer our sincerest of apologies,” Murray wrote on Instagram, sharing an image of the accidental advert.

"Hopefully everyone gets a laugh out of this and understands that this was not some obscene publicity stunt,” he continued. “Just a silly error on my part as I approved the ad from my cell phone without looking carefully enough.”

The Denim byob coupon, which offered $10 off of cash-only orders of $50 or more and publicized a gift card deal, is said to have been mailed to over 30,000 homes in the Haddonfield and Cherry Hill areas, The Philadelphia Inquirer reports.

The coupon offering $10 off of cash-only orders $50 and publicizing a gift card deal is said to have been mailed to over 30,000 homes in the Haddonfield and Cherry Hill areas (Denim byob)

“I saw that… and was like... um... is that legal? Hahahaha. Oops!” one Instagram user joked, clarifying that they were “still planning on keeping our reservation.”

“This is hilarious,” another agreed.