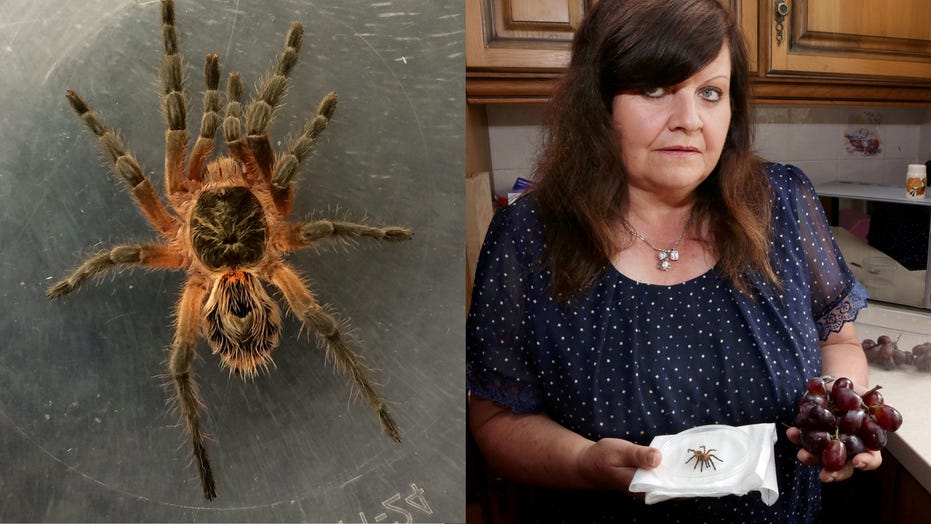 A grandmother in England opened a box of grapes and made a horrifying discovery: a live tarantula.

Gillian Shivers, from Newark, was about to give the carton of fruit to her grandchildren when she found the 3-inch arachnid, SWNS reports. Shivers' husband, Tony, reportedly killed the spider with boiling water. They then placed the body in a plastic tub.

The spider was eventually identified as a baby tarantula. It’s unclear how it survived the trip to England from Chile, where the grapes apparently originated. (SWNS)

The spider was eventually identified as a baby tarantula. It’s unclear how it survived the trip to England from Chile, where the grapes apparently originated. Shivers brought the spider and grapes back to the store where she got them, and an investigation is underway.

“She got the shock of her life, that's for sure," Shivers’ daughter, Helen Mathers, told SWNS. "She said it was the stuff of nightmares."

Gillian Shivers was about to give her grandchildren a snack when she made the shocking discovery.

"These things can shoot spikes and are venomous,” Mathers continued. “It may not be able to kill people but it could give a nasty bite so her first concern was for her grandchildren. She screamed for my dad and he came down and poured boiling water on it.

The family claims to have received backlash for killing the spider, but Mathers brushed off those concerns. "People have criticized us for killing it, but imagine being faced with a live tarantula in your grapes,” she said.

Mathers also questioned how the tarantula was still alive when the box was opened. "It was amazing that it survived the journey, it would have been in fridges between 0-5 degrees,” she said. “Apparently they don't hang around fruit either, so it’s pretty unusual."

When they took the box back to the store, they initially didn't get the response they were looking for. According to Mathers, "I took it back to the store and at first, they didn't seem that bothered, they just said, 'Oh, we get spiders in fruit such as bananas all the time.'" The store apparently came around, however, and they've reportedly launched an investigation into the incident.

"It’s not something you see every day and certainly gave my mom a shock, to say the least," she concluded. Fortunately, Mathers is right and this isn’t something we see every day.