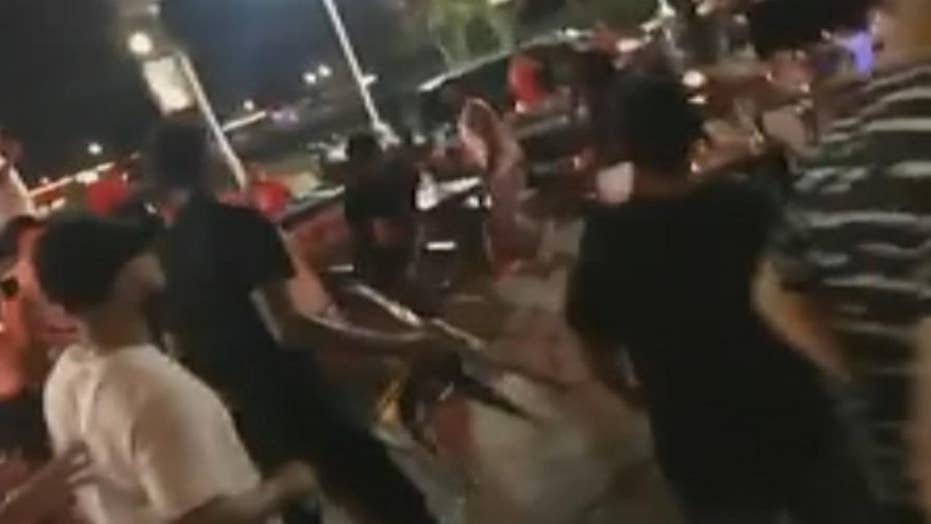 A massive brawl at a Houston sports bar called ‘Bombshells’ was caught on camera. Take a look at the chaotic scene.

A large-scale brawl broke out at a Houston sports bar earlier this week, and yet the cause of the epic melee remains a mystery.

On Monday night, several patrons at a location of Bombshells ‒ a military-themed restaurant chain ‒ began throwing punches and chairs in each other’s direction while a crowd of frightened customers looked on.

The brawl went down in the front patio area of a Bombshells location in South Houston. (Google Street View)

Footage of the altercation, taken by Juan DJ Martinez, shows a number of diners and bar patrons gathered on the front patio of Bombshells seemingly after a scuffle had taken place, with chairs strewn across the ground and a glass shattering from overhead. At one point, an unidentified man walks into the frame to antagonize another patron, yelling, “What’s up, buddy?” to someone just off-screen.

The incident went down at a location of Bombshells, a Houston-based restaurant chain that outfits servers in military-themed uniforms. (Facebook)

Another man is seen trying to get the attention of his friend, presumably to leave before the situation escalates again.

Later in the same clip, several men can be seen fighting just outside of the dining area and then running back onto the patio to throw chairs at one another.

Customers could be seen backing away as the brawlers reached for chairs to use as projectiles. (Juan DJ Martinez/Storyful)

The fight reportedly died down before cops arrived on the scene, KTRK reports. Witnesses say a lack of any visible security likely contributed to the situation.

A representative for Bombshells was not immediately available to comment.