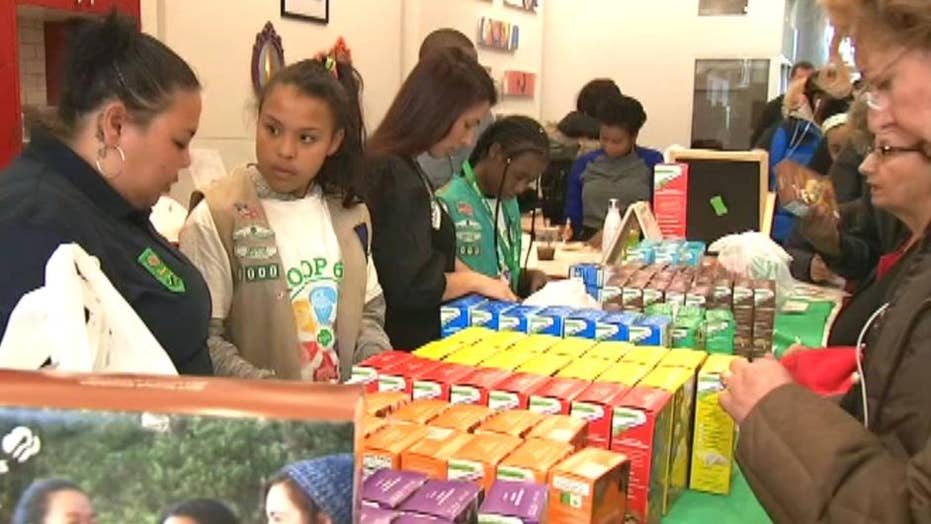 Giselle Burgess started Troop 6,000 when she and her four daughters became homeless in 2016.

Girl Scout Troop 6000 of New York City is celebrating an extra special cookie season this year. The region’s first homeless shelter- based troop has surpassed its goal of selling 6,000 boxes of the beloved treats in their inaugural year of cookie sales.

“A lot of people ask us, what’s the difference between us and traditional troops, and there really isn’t a difference. They’re exactly the same, just that they don’t have a home,” troop leader Giselle Burgess told Fox 5.

Burgess founded the troop in 2016, and her four daughters are now “thriving” alongside 290 fellow scouts.

TSA DENIES CLAIM THAT THEY ARE RANDOMLY SCREENING TRAVELERS' SNACKS

“I’m very excited because it’s the first time and I want to know the feeling of actually selling something,” a Girl Scout named Sinai told Fox 5 of their entrepreneurial endeavor. Selling Tagalongs, Thin Mints and America's favorite Girl Scout cookie, Samoas, out of the Kellogg’s Café in Union Square, their booming business shows no signs of slowing down.

“The biggest impact that we see ‒ and when you talk to the girls you’ll hear them say [it] ‒ is that they belong to something, they have a sisterhood within the other Girl Scouts,” Meredith Maskara, CEO of the Girl Scouts of Greater New York, told ABC News. “They talk to other girls who may be in their same situation who feel alone, and they feel like they have a stronger sense of community and belonging overall.”

Shelter resident Ruby Cornelio told Refinery29 that she is thankful her daughters Jasmine, 8, and Juwanda, 6, have the opportunity to get involved with the cause. "It's a big step to take because it teaches them responsibility, it's a good skill to learn at a young age,” she said.

“They have been wanting to do this for so long,” Corinthia Fludd, the troop's recruiting specialist, shared with AM New York. “It’s the number one thing they ask.”

Though the Girl Scouts have been selling cookies for 101 years, the first year of sales are especially sweet for Troop 6000.

"Girl Scouts has taught me I can be whoever I want to be, no matter what age, what gender," Troop member Karina told Refinery29. "I can be whatever what I want to be. I don't have to be a boy [to do that], I can be a girl."

Troop 6000’s cookies are available for purchase through their online page.