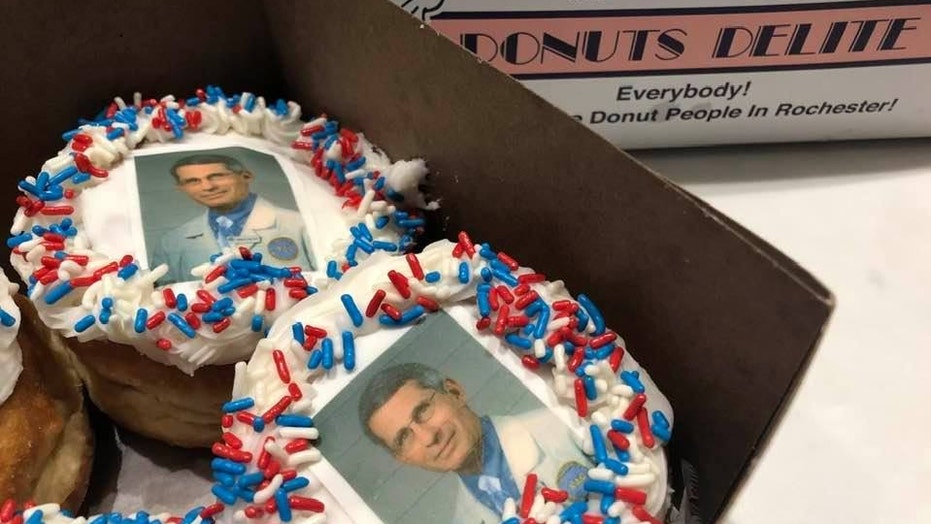 And to think, all this time, doughnut shops have been decorating their goods with just plain sprinkles.

A doughnut shop in Rochester, N.Y., has recently seen business “explode” after they started decorating doughnuts with the likeness of Dr. Anthony Fauci, the longtime director of the National Institute for Allergy and Infectious Diseases (NIAID) and one of the most respected immunologists in the world.

Sam Fantauzzo, who owns the Salvatore’s Pizza brand, told Fox News that he came up with the idea to start putting Dr. Fauci’s face on doughnuts after he was approached by Donuts Delite franchise owner Nick Semeraro, who runs the doughnut shop out of a Salvatore’s Pizza location in Rochester.

“He called me last Monday, basically half his business was down,” Fantauzzo told Fox News, explaining that much of the doughnut shop’s revenue comes from its wholesale division, which provides treats for colleges and businesses in the area. “He’s got employees that have been with us for 10 years, and he didn’t want to lay anybody off.”

Fantauzzo quickly came up with an idea to start selling Donuts Delite doughnuts at all 29 Salvatore’s Pizza locations — but they weren’t generating the kinds of sales he and Semeraro were hoping for. So, having recently seen Dr. Fauci on TV during one of the White House’s press briefings, Fantauzzo got an idea.

“Why don’t we create a really cool, different doughnut with Dr. Fauci’s face on it?” he said. “He’s on the news a lot, he’s really calming, he’s knowledgeable, he’s not political… We’ll make some, we’ll put them on social media. Let’s try it.

“And then it just took off,” Fantauzzo said.

Within days, Donuts Delite was cranking out 1,000 of their “Doc Donuts” each morning, using edible materials to impart Dr. Fauci’s likeness on each. On Friday, they made 2,000, and were nearly sold out by lunchtime.

“When I thought of putting Dr. Fauci on the doughnuts, I liked him from his demeanor on TV and all that, but I didn’t know much about him,” Fantauzzo admitted. “But we’ve seen retired doctors and nurses coming in to try it… he’s been their hero for years and years.”

Fantauzzo and Semeraro have said they also want to start shipping the Doc Donuts across the country, seeing as people have been calling from around the nation. “Some people in Washington D.C. called about them,” Fantauzza laughed. “If the Pentagon wants some of these doughnuts, we’re gonna figure out a way to get ‘em there and make it happen!”

“Birx is probably the next one. Or maybe the surgeon general. Or maybe at the same time.”

In the meantime, Fantauzzo said his primary goal is to spread a little cheer — and he’s glad it’s working.

“We just wanted to keep the bakers going, wanted to put a smile on people’s faces,” he said.