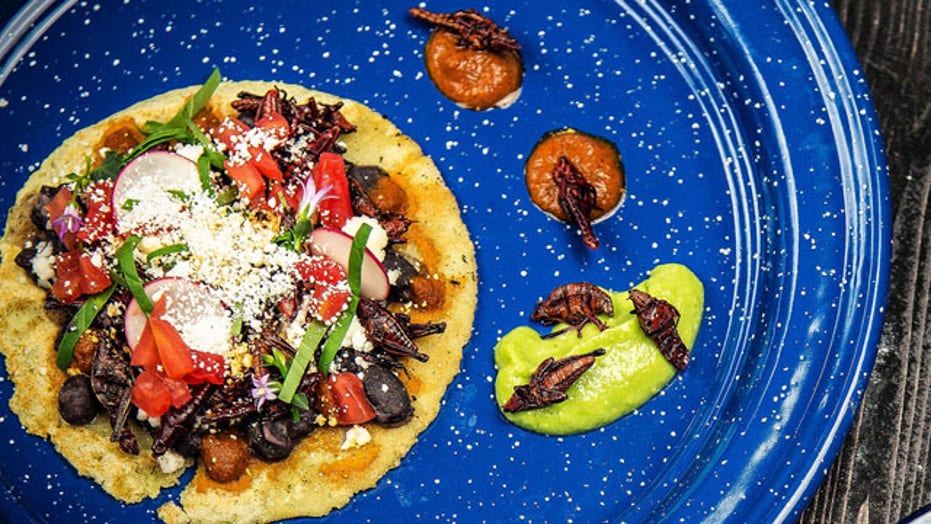 Gourmet food that may bug you

A New York restaurant features dishes made with ants, grasshoppers and other insects.

At Tomorrow's Harvest farm, you won't find acres of land on which animals graze, or rows of corn, or bales of hay. Just stacks of boxes in a basement and the summery song of thousands of chirping crickets.

It's one of a growing number of operations raising crickets for human consumption that these farmers say is more ecologically sound than meat but acknowledge is sure to bug some people out.

Once consumers get beyond the ick factor, they say, there are a lot of benefits to consuming bugs.

"We don't need everybody to eat insects," said Robert Nathan Allen, founder and director of Little Herds, an educational nonprofit in Austin, Texas, that promotes the use of insects for human food and animal feed. "The point we really like to highlight with the education is that if only a small percent of people add this to their diet, there's a huge environmental impact."

THESE RESTAURANTS ARE MAKING BUGS DELICIOUS

Cricket fans say if only 1 percent of the U.S. population substituted even just 1 percent of their meat consumption with insects, millions of gallons of water in drinking and irrigation would be saved, along with thousands of metric tons of greenhouse-gas emissions from machinery and animals.

At least one study finds the claims overstated that crickets are a viable protein source to supplement or replace meat, but bottom line, it generally takes fewer resources to raise and harvest crickets than, say, cattle.

Interest in entomophagy — the consumption of insects — was fueled in part by a 2013 report from the Food and Agriculture Organization of the United Nations on the viability of edible insects to help curb world hunger.

Since then, the number of producers of food containing crickets, from protein bars to chip, has jumped from zero to about 20, and cricket farms for human food have grown to about half a dozen in the United States, Allen said.

The protein-packed food can be ground into powder and added to other foods or eaten whole, dried, sauteed and spiced. Crickets have a nutty or earthy flavor that's masked by other flavors in protein bars.

Self-described adventurous eater Matthew Monroe, 53, of Portland, Oregon, said he's fond of blueberry-vanilla Exo bars containing cricket flour and dines on them when he gets that "protein bar jonesing feeling." They also taste better than other protein bars, he said.

There's no problem selling crickets as long as manufacturers ensure the food they produce for the U.S. market is safe and complies with all relevant laws and Food and Drug Administration regulations, including proper labeling.

Raising crickets doesn't take much space, but there are complexities.

Swanson, who just started selling cricket protein powder online, hopes to get into a warehouse where some of the work could be automated.

"The sky's the limit. This is the stone age right now as far as insect farming," he said. "So we have nowhere to go but up."

Kevin Bachhuber knows that firsthand. He started the first U.S. cricket farm for human food in the Youngstown, Ohio, area, according to Allen. It operated until lead in his water supply prompted him to close it, Bachhuber said.

Now, Bachhuber said, he is helping new cricket farmers get started or existing farms that raise crickets for reptile feed and fish bait get up to food grade standards.

"For the first couple years, you know, we always struggled with having enough supply. Now that we're starting to be able to add some of these older farmers into our supply chain. ... It's not quite so heavy pressure," Bachhuber said.

The first U.S. academic conference devoted to insects for food and feed was held in Detroit in May. Now the young industry is forming The North American Edible Insect Coalition , a trade group, with the priorities being research and public education.

"Half the battle if not more is educating people why. You can't just say, 'Eat crickets, please.' You have to tell them why," Swanson said.