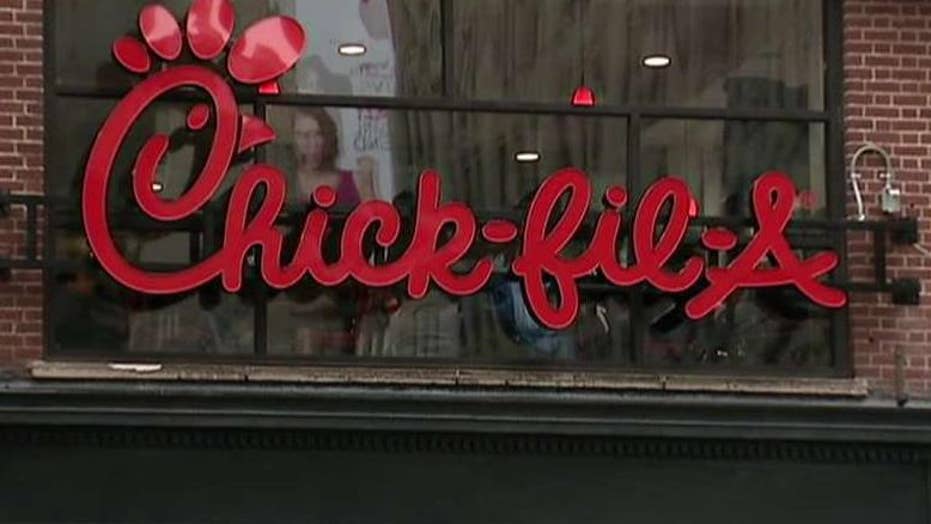 The Chick-fil-A at the Mineta San Jose International Airport is the fast food restaurant's latest location to be targeted.

Activists protested the opening of the chain at the airport on Tuesday, even though it had been approved last year as part of a package deal with other vendors. The City Council blasted the company and ended up rejecting a contract extension with Chick-fil-A because of what they called an "anti-LGBTQ stance." They also voted to put LGBTQ flags around the store, making it the "gayest Chick-fil-A in the country," according to one city councilmember.

Chick-fil-A was recently banned from airports in San Antonio and Buffalo. The city of San Jose, where two Chick-fil-A's are already in operation just miles from the airport, criticized the Christian company but stopped short of removing it from the airport. The chain is expected to open at the San Jose airport next month.

CHICK-FIL-A BANS SHOULD DISGUST YOU, WHETHER YOU ARE A CHRISTIAN OR NOT

“My heart just sank when I saw the construction wall (at the airport),” former County Supervisor and the first openly gay lawmaker in the county Ken Yeager, told the San Jose Spotlight. “I’ve been doing LGBTQ rights activities for 35 years. I remember when this city was not welcoming and we’ve come a long way. I feel like this is a throwback to those times.”

The chain has a six-year deal to operate at the airport. City council members rejected a contract extension on the grounds that Chick-fil-A doesn't open on Sundays, one of the airport's busiest travel days. By nixing the extension, the restaurant will only be allowed to operate through 2026. The Christian-owned fast food joint closes on Sundays to allow employees to spend the day resting and in worship.

Keisha Russell, associate counsel to First Liberty Institute, argued that the city council's attempt to ban Chick-fil-A is not only bigoted, it's illegal.

"The city council cannot operate in a way that brazenly violates the Constitution and federal law, but if it chooses to, then the federal government should pull its grant," Russel wrote in a Fox News op-ed.

BANNING CHICK-FIL-A IS NOT ONLY BIGOTED -- IT'S ILLEGAL

To avoid the risk of violating the First Amendment, City Attorney Rick Doyle reportedly cautioned the council not to reject the contract extension on religious or political grounds.

Not everyone agreed though. Some argue customers, not the government, should decide.

“They do not discriminate against LGBTQ in serving their customers,” Shane Patrick Connolly, chief of staff for Councilmember Johnny Khamis, tweeted. “If we disapprove of owners’ views, we may vote with our dollars: eat elsewhere.”

San Jose councilmembers admitted they overlooked the issue when they approved the restaurant in March 2018.

“There are some people who are very political, there are people who have social, conscientious issues,” Joe Good from Oregon told FOX 2. “I just like a good sandwich.”