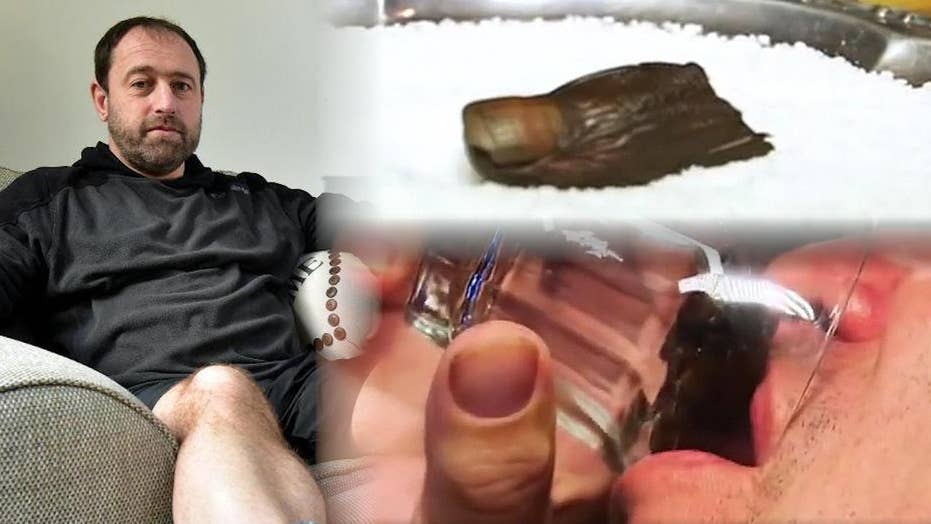 An adventurer and ex-Royal Marine in England who lost three toes to frostbite in 2018 has successfully mailed one of the digits to the Dawson City hotel's bar, where it will now be used to garnish the bar’s signature “Sourtoe Cocktail.”

The hotel’s bar has actually been serving its Sourtoe Cocktail — basically just a shot of whiskey with a shrunken human toe in it — since 1973. (Downtown Hotel)

Nick Griffiths, from Bolton, Greater Manchester, was hospitalized in February 2018 after severe temperatures had forced him to drop out of the Yukon Arctic Race. He sought medical treatment for frostbite at the Whitehorse Hospital, which is when he remembered a strange advertisement he saw just before the race.

Nick Griffiths lost his toes to frostbite he suffered during the Yukon Arctic Race in 2018. (SWNS)

“It said: ‘Had frostbite? We want your toes,’” Griffiths told The Guardian. “I thought it was a bit of a joke, really.”

But the ad was very real, as the Downtown Hotel is always on the lookout for frostbitten toes to garnish their creepy cocktail. The hotel’s bar has actually been serving up the drink — basically just a shot of whiskey with a shrunken human toe in it — since 1973. And according to the bar’s rules, anyone who orders is tasked with touching the toe to their lips in order to join the “Sourtoe Cocktail Club.” (Customers are told, “You can drink it fast, you can drink it slow, but your lips must touch the toe.”)

Griffiths had also confirmed the strange news from a nurse who was treating him, Global News reports.

Griffith's toes were removed upon further treatment in England. (SWNS)

The explorer, 46, ultimately had three of his toes removed upon further treatment in England, and saved each in tiny jars. And that’s when he began corresponding with the Downtown Bar and its “Toe Master,” Terry Lee, who was excited to add Griffiths’ toe to the collection.

Griffiths was unsure of the legality of “sending amputated toes through the post,” however, and hadn’t actually put one into the mail until last month. (He says he kept the other two as “insurance,” just in case the big toe didn’t make it to the bar.)

But just last week, the toe arrived in Dawson City, where it was warmly welcomed by the Downtown Hotel.

"The big toe is the money toe. That's what it started with … a big toe," Lee told the CBC. "We usually don't get frostbitten toes. Usually, they're from gout or diabetes, or they're lawnmowers or chainsaws or accidents… To get a frostbitten toe, that's phenomenal."

The bar is also keen for Griffiths to come back down to the Yukon to try it, although he hasn’t made plans as of yet.

“But I think it’s a nice little bit of fun,” he told the Guardian.

Griffiths' toe (not pictured) will enter into a rotation with three other toes currently in rotation at the bar. (Downtown Hotel)

The bar has reportedly collected about 10 dismembered toes in total, and proudly displays the legend behind each on the bar’s Wall of Fame. When a new one arrives, it is put into a “medical fluid,” according to Lee, and then trimmed of any “fat of veins that might be hanging out.”

Lee then places them in rock salt for six weeks to dry out. The toes that go into the cocktails are also kept in salt and rotated out each week.

The preserved toes are kept in salt when not serving as garnishes. (Downtown Hotel)

Over the years, the bar claims that over 100,000 patrons have ordered its Sourtoe Cocktail, making them members of the Sourtoe Cocktail Club. The bar says patrons are also not allowed to swallow the toe – which has actually happened, twice – lest they be charged a $500 fine.