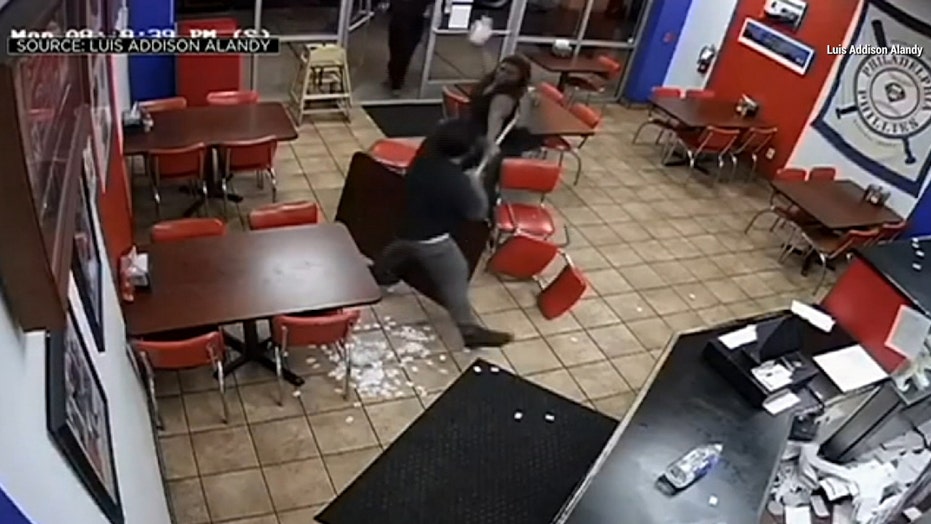 A California woman allegedly damaged the dining room of a sandwich shop and attacked its owner and employees after she was denied a refund for her half-eaten sandwich.

A California woman allegedly damaged the dining room of a sandwich shop and attacked its owner and employees after she was denied a refund for her half-eaten sandwich.

Monique Collins, 44, reportedly entered a Philly Cheesesteak location in Stockton around 7:40 Monday night and began arguing with staff about a sandwich she had purchased earlier, police say.

According to the police report, Collins complained about the quality of the sandwich and demanded a refund.

"The two sandwiches are already eaten, half of each, and the fries, already half of each," restaurant owner’s wife Analiza Alandy said to KOVR. "Our policy is, if you have a complaint, if we made a mistake, we will gladly replace it, but we need the sandwich back for us to replace the whole sandwich."

WENDY'S EMPLOYEE FILMS HERSELF QUITTING, LEAVING THROUGH THE DRIVE-THRU WINDOW: 'ALWAYS WANTED TO'

Alandy said that after she was refused a refund, the woman began destroying the dining area.

In video of the incident, the woman is seen knocking items off the counter, throwing chairs and flipping over tables. The 50-year-old shop owner comes out at one point with a broom seemingly trying to stop the woman, but she grabs the broom and begins swinging it at the man.

“During the argument, the suspect threw a glass tip jar at the victim and struck him one time with a wooden broom,” the police shared in a report on Facebook.

After Collins left the store, she was discovered at her residence by police later.

She was arrested for assault with a deadly weapon.