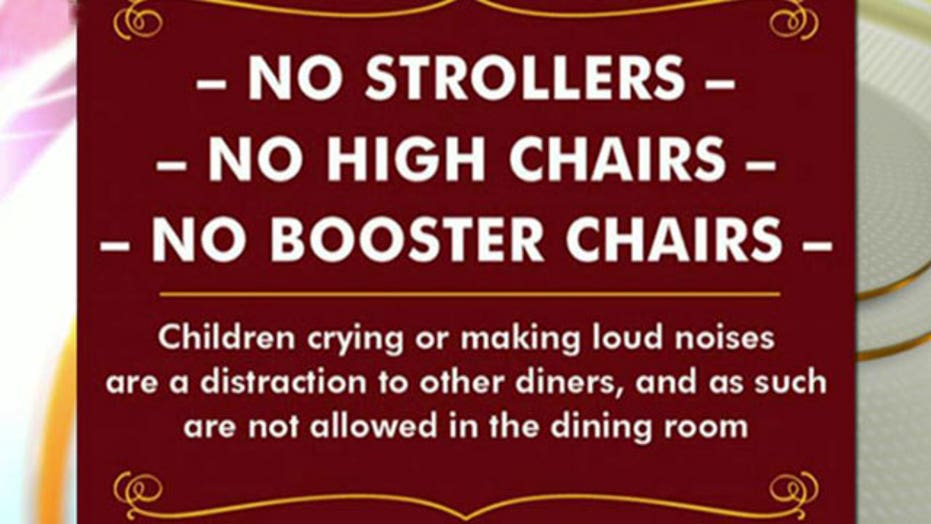 A popular restaurant in Monterey has offended parents with a sign they posted that prohibits strollers, high chairs, children crying or making loud noises.

Old Fisherman’s Grotto initially posted two signs two years ago but has recently added a third sign that caught the attention of some tourists, reports KSBW.

Although the sign does not explicitly ban kids from dining, restaurant owner Chris Shake said that customers who do not heed the establishment’s warning will be asked to leave.

"If a place has the rules, that's what the rules are," Shake told KSBW. "You go in and abide by the rules or you find a place more suitable for you."

The station also reported that at least one customer, Niki Riviere, was turned away from the restaurant because she wasn’t able to get a high chair for her 6-month-old child.

"I'm completely shocked because I never had that happen," the mother told KSBW. "Usually they cater, at least have a high chair for the child, but it seemed like they didn't want any child. They said the child can't make any noises so they turned us away."

Shake remains unapologetic and claims the ban has actually boosted his restaurant’s popularity.

"Well, let's put it this way -- I haven't had a down year for over 20 years and our business continues to grow," Shake said.

Old Fisherman’s Grotto is not the only restaurant with a no-kids policy. Last summer, Houston’s La Fisheria began banning children under the age of 8 after 7 p.m.