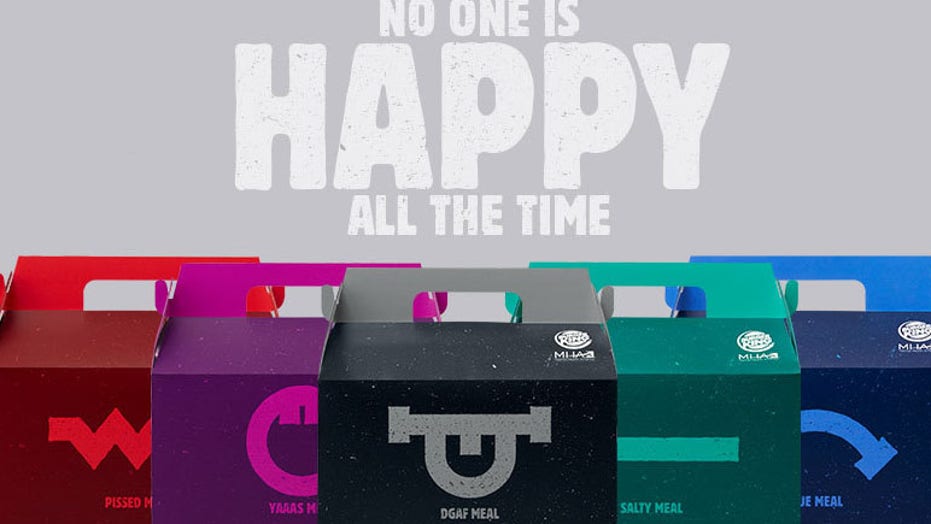 The fast-food chain recently announced the launch of their lineup of “Real Meals,” which include a wide variety of moods. The options are Pissed Meal, Blue Meal, Salty Meal, YAAAS Meal and DGAF Meal, and they all come with a Whopper, fries and a drink.

The promotion will only be available for a limited time at select restaurants in New York City, Los Angeles, Miami, Austin, Seattle and Miami.

The campaign was created to coincide with May for Mental Health Awareness Month. According to a press release from Burger King, “A natural extension of encouraging people to “be their way” is encouraging them to “feel their way.” With the pervasive nature of social media, there is so much pressure to appear happy and perfect. With Real Meals, the Burger King brand celebrates being yourself and feeling however you want to feel.”

While it's not specifically stated, these meals appear to be a response to McDonald's popular Happy Meals.

The company released a short film to launch the campaign, which features people expressing varying moods, such as sadness or anger.

For an ad campaign based on not feeling happy, people seem to be thrilled. As one social media user tweeted, “I respect @BurgerKing for the #FeelYourWay program to help raise awareness for Mental Health for the kids. Kids don't be afraid to speak out on any issues you got going inside your mind.”

Another user added, “see this is why you’re better than McDonald's.”

Yet another tweet simply stated, “you’re the only one that understands me, burger king,” with another user saying "I'll take one. Didn't expect this real commercial about struggle and mental health issues but I'll take it with a Whopper meal.”

Unfortunately, as one user found out, Real Meals don't come with a toy. To get one of those, customers will still have to swallow their emotions and get a Happy Meal.