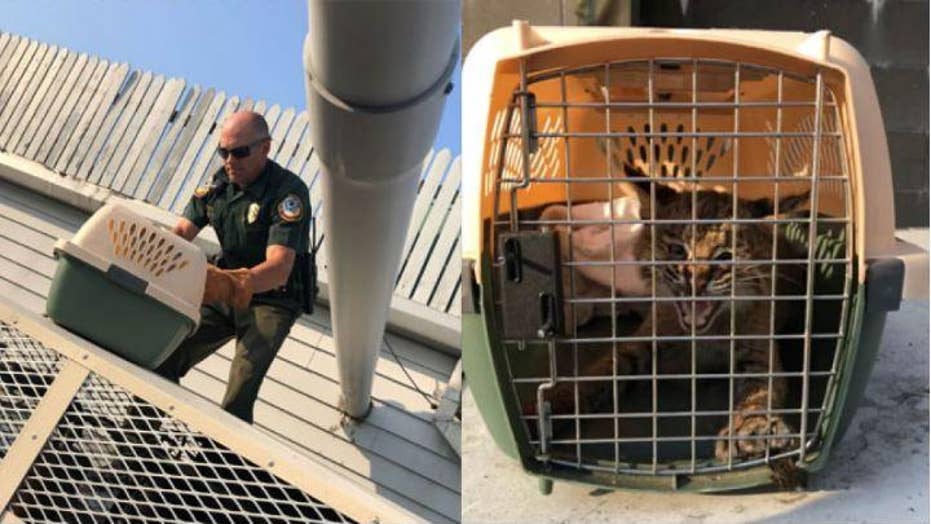 Animal control authorities were called to rescue a wild bobcat that was stuck on the roof of a New Hampshire Burger King.

A New Hampshire Burger King was forced to call authorities for help when a bobcat cub seemingly got stuck on the restaurant’s roof. Apparently, the phrase “have it your way” doesn’t apply to wild animals.

The bobcat was spotted on the roof of the Burger King.

New Hampshire Fish and Game was called in to handle the situation, Boston 10 reports. The animal was caught and safely removed from the situation. Police did not, however, reveal where the bobcat was taken.

They did post photos of the animal to Facebook, showing it on top of the Burger King roof and also tucked into a carrier. There’s also one shot that shows it sitting near the top of a tree.

COP ACCUSES MCDONALD'S EMPLOYEE OF BITING HIS FOOD, FORGOT THAT HE BIT IT HIMSELF

The Stratham N.H. Police Department posted to Facebook, “All in a day's work...Off. Matt Callahan received a call of a bobcat cub on the roof of Burger King over the weekend. Fish and Game were called and the little guy was taken away safely.”

This isn’t the first time a fast-food spot had trouble with an animal.

In June, two men reportedly rode horses through the drive-thru in Staines, England, stole another car’s order and then tried to get one of the horses into the restaurant. The incident was caught camera, which shows the large animal walking up to the door, but stopping before going inside.

“I was really shocked,” Manir Mohammed, the restaurant's manager, said. “It is the first time I have been so close to a horse and I did not know what to do, but luckily they backed out before they could bring the horse into the restaurant.”