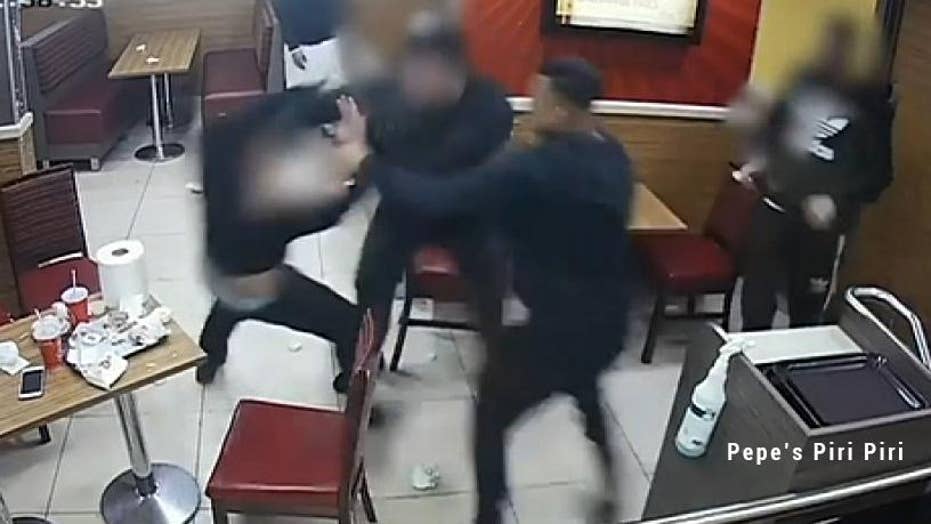 Watch: Brutal brawl caught on video at a fast food restaurant in England

A brutal brawl sparked after a woman was hit with a side of mayonnaise at a Pepe’s Piri Piri restaurant in Blackburn, Lancashire.

A brutal brawl ensued after a woman was hit with a side of mayonnaise at a fast-food restaurant in England, prompting two men at a nearby table to get involved.

In video footage of the fight, a man is seen smacking a side order of what appears to be mayonnaise at a woman sitting with friends at a Pepe’s Piri Piri restaurant in Blackburn, Lancashire, The Sun reported.

The incident, which took place around 10:35 p.m. on Thursday, started when the woman was reportedly arguing with the man who threw the sauce. After hurling the condiment, he casually walked downstairs.

Once the man is gone, two men at a nearby table get up and begin to kick and punch a man seated with the two women.

One of the assaulters begins punching and kneeing the man in the face as he tries to defend himself. The women are seen standing back during the physical altercation.

At one point, the men stop beating up the person who is seated and he flees downstairs as the two wipe themselves off with paper towels.

For some reason, the beaten man returns and rushes one of the attackers, but is quickly thrown into a table. Once on the floor, the men – joined by a third friend – begin kicking and punching him while he curls up on the ground.

Eventually, others at the restaurant intervene and the man is able to get away.

The viral video, which pulled in over 60,000 views, according to The Sun, alarmed those who saw it and many commenters were calling for the men to be arrested for the shocking scene.

The incident was reportedly not filed with police and no arrests have been made.

It is not clear what began the altercation or the relationship between the attackers and the man who threw the mayonnaise.