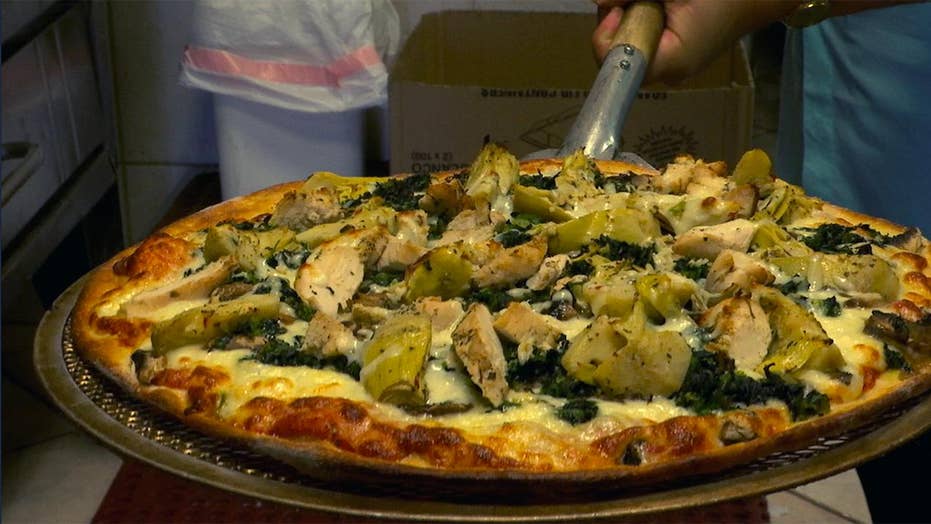 HOUSTON – Fawaz Hajjar, the owner of Fuzzy’s Pizza in west Houston, has an item he loves to make. The pizza recipe – spinach, mushrooms, artichoke hearts, and chicken – was also a personal favorite of one of his most famous customers. So, he named it after her.

“Every time she came in, she ate Barbara Bush pizza,” said Fawaz.

Barbara Bush and her husband, former president George H.W. Bush, were regulars at Fuzzy’s for 25 years. The pizza shop is 10 minutes away from the Bush home.

As the couples grew closer, Hajjar and his wife decided to dedicate something more—a room in the back of their restaurant to the presidential couple.

The room is adorned with rows of framed photos and newspaper articles of the Bush family, some signed by the former president.

Fuzzy's Pizza named two pizzas for the Bushes--the most popular items on the menu. (Fox News)

“We actually built this room special for them because when they come, he brings his office staff, or sometimes he brings different people with him,” Hajjar’s wife, Rita, told Fox News.

As an immigrant from Syria, Fawaz said the Bushes often called him the “American Dream.” To the Hajjars, the couple was the embodiment of American values.

Some of those customers, too, paid tribute in another way.

“There’s a lot of ladies that’s coming in today, wearing their pearls, and they call it pearling for Barbara,” said Rita.

All for a woman whose presence will always be remembered.