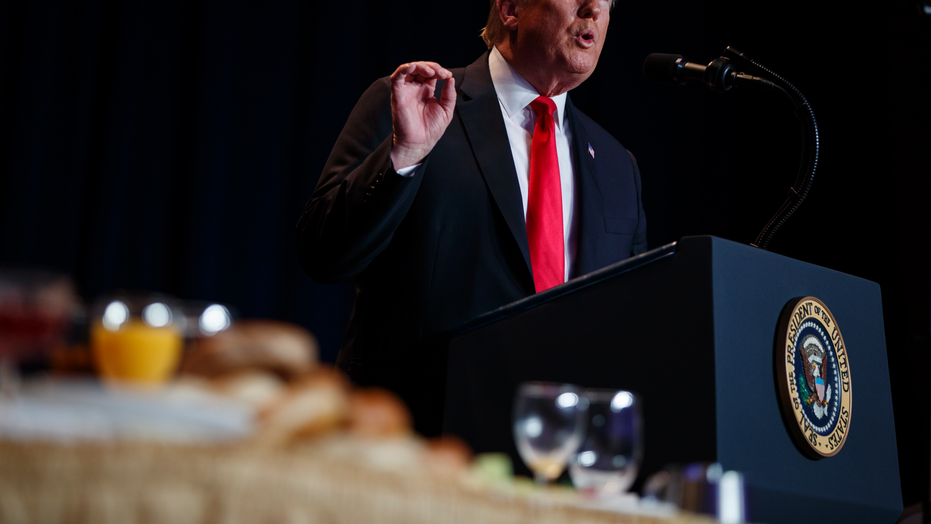 Trump speaks at National Prayer Breakfast: We have people that love their country and love their faith

President Trump says many great U.S. achievements have been led by faith leaders.

The president and a guest -- kept confidential until the morning of -- speak on the first Thursday of February every year at the National Prayer Breakfast, which is attended by 3,500 guests from more than 100 countries.

President Trump is set to address the faith-filled gathering Thursday at the Hilton's International Ballroom in Washington although the event includes a series of meetings, luncheons and dinners.

Last year, Trump told the audience "I will never let you down, I can say that -- never" before Sens. Chris Coons, D-Del., and James Lankford, R-Okla., who co-chair the national breakfast and the weekly Senate prayer breakfast on Capitol Hill, joined in praying for the president.

Established in 1953 by President Dwight Eisenhower at the urging of the late Rev. Billy Graham, the prayer breakfast has been hosted by members of Congress and is organized on their behalf by the Fellowship Foundation. The Christian nonprofit was founded by Abraham Vereide, a Methodist pastor based in Seattle.

Past speakers include Mother Teresa, Bono, Tony Blair and most recently, Gary Haugen, the CEO of the International Justice Mission.

Since its inception in the U.S. capital, several states and cities, as well as other countries including Australia and the United Kingdom, started their own annual prayer breakfast events.