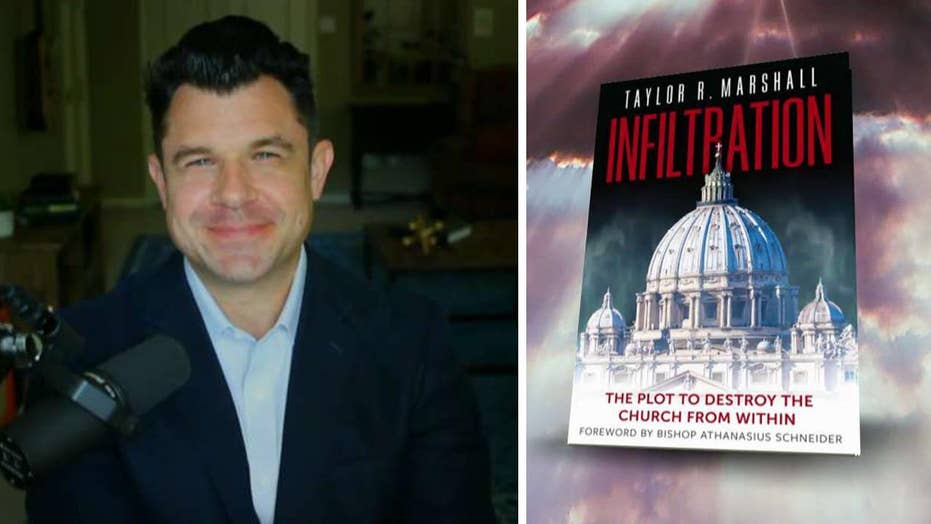 Is the devil behind the Catholic Church sex abuse crisis?

In his new book 'Infiltration, The Plot to Destroy The Church From Within,' Dr. Taylor Marshall attempts to get at the spiritual roots of the clergy sex abuse crisis as well as other problems in the church, claiming the devil is to blame. Dr. Marshall joins Lauren Green to discuss his book, the sex abuse scandal and share his thoughts on what has contributed to the spiritual decay within the church.

New York's Archbishop Timothy Cardinal Dolan described last year's months of revelations about decades of clerical sexual abuse as "the summer of hell." It's a figure of speech that one author believes may have more bite than bark. In other words, demonic forces may have played a large part in the Catholic Church's crisis.

A warning here: If you don't believe that Satan and his spiritual band of evil malcontents are on the prowl in this world, don't bother reading his book – per his request.

Author Taylor Marshall said, "We have to remember from the Christian point of view going back from well before the beginning of time, there is the fall of the angels. Lucifer and a third of the angels fell. And then all the way up to the time of Christ, there was all of these betrayals that were spiritual in nature."

In his new book, “Infiltration, The Plot to Destroy the Church From Within,”  Marshall attempts to get at the spiritual roots of the clergy abuse crisis in the Catholic Church.

POPE FRANCIS MADE THIS BIG CHANGE TO LORD'S PRAYER

He posits that, for 2,000 years, the church withstood assaults from the outside, from Nero to Napoleon, Modernism and Secularism. But now, he said, the decay is coming from within. And the devil is in the details.

He said the proof is in the words of Christ himself. Taylor says, "He [Jesus] sees that our chief enemies, our chief problems are the demonic. He talks about demons, he casts out demons all the time."

There are Christian Scriptures in the Bible that support his claims. Of course, Jesus is tempted by the devil in the wilderness, and is victorious over the spiritual assault. In the Gospel of John, Jesus rebukes the Pharisees who challenge his authority saying, "You belong to your father, the devil, and you want to carry out your father's desires. He was a murderer from the beginning, not holding to the truth, for there is no truth in him. When he lies, he speaks his native language, for he is a liar and the father of lies."

Jesus also admonishes Peter, one of the Apostles, for some wrong theological thinking, saying, "'Get behind me Satan! You are a stumbling block to me; you do not have in mind the concerns of God, but merely human concerns." Jesus is calling out Satan for getting into Peter's head.

Peter, apparently learned his lesson, for in his letter to the new band of Christians he warns, "Be alert and of sober mind. Your enemy the devil prowls around like a roaring lion looking for someone to devour."

Taylor also sites a famous passage from St. Paul the Apostle's letter to the Ephesians, which said, "For we wrestle not against flesh and blood, but against principalities, again powers, against the rulers of the darkness of this world, against spiritual wickedness in high places (6:12, New King James Version)

Satan has a long history in folklore and faith. He's been around for a very long time, almost since the beginning. In Islam he is called either Iblis, from the Greek word diabolos, or Shaitan, which is like the Hebrew word for Satan in the Old Testament. In the Bible, Satan makes his first appearance as the tempter to Adam and Eve, becoming responsible for their fall from grace and being expelled from The Garden of Eden. But how Satan, in the form of a serpent, got in God’s Garden in the first place is not clear. His real origins as the holder of evil, says noted theologian Dr. John Piper, is “shrouded in mystery.”

In his book, “Fifty Reasons Why Jesus Had To Die,” Piper writes, "The heart of the Bible is not an explanation of where evil came from, but a demonstration of how God enters into it and turns it for the very opposite ---everlasting righteousness and joy."

According to a 2009 Barna Group survey, about 40 percent of Christians polled didn't believe Satan was an actual being but a symbol of evil.

Despite those findings, and the fact that we live in a technologically driven world, the devil is still a major player in our culture. The Faustian theme runs rampant in entertainment, from classical music with composers like Beethoven and Berlioz, to Broadway musicals like “Damn Yankees,” and movies like “Bedazzled,” and “Little Shop of Horrors.” They build on this theme that to have beauty, youth, power and money, people have made a pact with the Devil, selling their souls. When payment comes due, there is repentance, but too late. The morality tale is a lesson to audiences that the devil has no good intentions. Peter's warning updated.

Taylor hand-delivered his book to Pope Francis a few weeks ago. It's not certain if he's read it or what he thinks about it. The pontiff just recently released his own book on the 'father of lies' called “Rebuke the Devil.” It's published through the United States Conference of Catholic Bishops, which is grappling with how to combat the scourge of clerical abuse here in America.

Taylor, however, is not saying an abuser can use the excuse, "the Devil made me do it." He's not discounting the need for policy changes, reporting abuse to civil authorities, and concrete legal steps to protect victims.

But, he said, "if you want to look at the current crisis, you can't just point to policies or a bad bishop here and there, of course all those things are true."

Plus, he said, there is a spiritual infiltration going on with it.

“From the Christian point of view,” he said, “that's always been there because Christ talks about the devil, and he talks about him influencing people."

And priests are people.