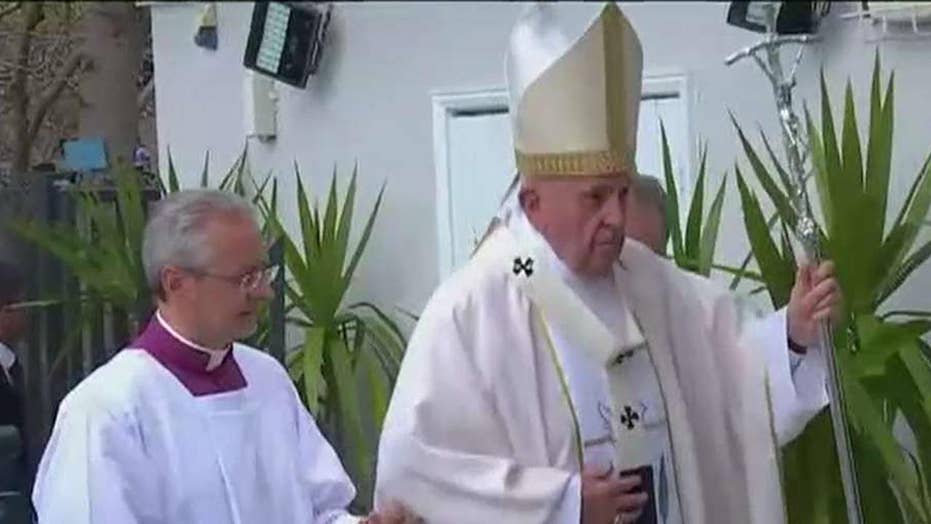 The Pope hopes to discuss the possibility of allowing Catholic priests to marry.

Pope Francis on Sunday convened a meeting of bishops to discuss a list of topics -- including whether the Catholic Church should ease its policy of celibacy for priests, a 1,000-year-old precedent that is expected to spark a heated debate between adherents of the tradition and proponents who’ve said ordaining married men would help solve the church’s clergy shortage.

The Vatican meeting, known as a synod, was to focus on the church’s activity in South America’s Amazon region, a sparsely populated region where Catholic parishes could go for months without seeing a priest.

Pope Francis delivering a blessing as he celebrated an opening Mass for the Amazon synod, in St. Peter's Basilica, at the Vatican, on Sunday. (AP)

Cardinal Cláudio Hummes, a former archbishop of São Paulo, told reporters last Thursday that the priest shortage has meant Catholics in the Amazon frequently have lacked access to the sacraments, a bleak sign for the church’s ministry.

To reverse this trend, the church has considered the ordination of indigenous elders, “even if they have an existing and stable family, in order to ensure availability of the sacraments that accompany and sustain the Christian life,” according to the synod’s official working document which The Wall Street Journal cited.

But, some analysts have doubted whether ordaining married indigenous leaders in the Amazon would solve the priest shortage there. Canadian Cardinal Marc Ouellet, the head of the Congregation for Bishops, argued in a book published last week that a clergy’s celibacy was precisely why local communities revered them.

Others have argued that loosening the celibacy rule in remote places such as the Amazon or the Pacific Islands – which the church has considered in the past – would open the door to other controversial issues including homosexuality and women’s ordination.

Still, any decision would require the final approval of the pope who has said he would pray and reflect on the decision further.