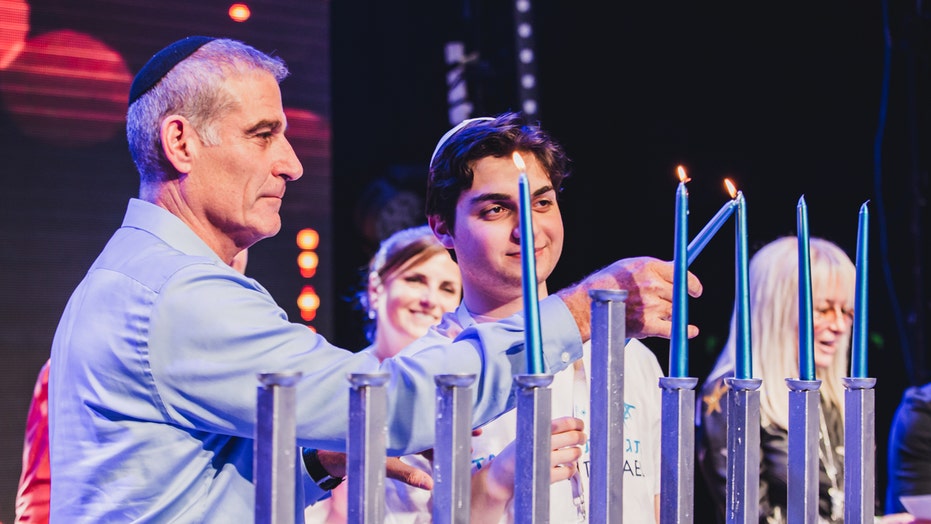 Birthright Israel, a travel organization that offers Jewish young adults a free 10-day trip to the Holy Land, has become a rite of passage for many Jews around the world.

It all started when 20 years ago, when Birthright founders realized that Jewish people in the United States and abroad were getting increasingly disconnected from Judaism, their faith and their roots.

In an effort to combat this, Jewish community organizations, the Israeli government and a core group of Jewish philanthropists – Charles Bronfman and Michael Steinhardt, later joined by Sheldon and Mariam Adelson in 2006 – formed Birthright Israel.

90,000 JEWS GATHER IN CELEBRATION OF TALMUD AFTER ANTI-SEMITIC ATTACKS: ‘WE WILL NOT BE INTIMIDATED’

The trips are open to ages 18 to 32 and, to date, they have provided a "long-lasting and very deep" impact to every one of the 750,000 participants from 68 countries.

"Every Jew has the right to choose their own version of Judaism, be it religious or ethnic. What we allow is for everyone to pursue their own identity," Gidi Mark, the CEO and first Birthright Israel employee, told Fox News. "That’s why we believe Israel is the key component of identity for young Jews today."

They've opened the trip to a larger age range and include Israelis as a way to deepen the connection in the face of new challenges like the Boycott, Divest, and Sanctions (BDS) movement and rising anti-Semitism on campuses and across the country.

Over the years Birthright has diversified their catalog to offer trips aimed at travelers with disabilities, sport-oriented people, artists and the LGBTQ community, to name a few.

More than anything, though, each trip has led to lifelong relationships, from friendships to marriages.

Carly and Alex Vargas, 31, were living miles apart in Boston but didn't meet until they landed in the Holy Land for their trip in the summer of 2014.

They chose to go on an Israel Outdoors, an active and culture-based trip, and together they hiked, rode camels through the desert, visited Bedouin tents and ate local food at the markets. It was a fast-track to a lifelong relationship.

Aftre the experience, the couple has been more open about their Jewish faith and continues to keep up with many of the people from their trip. They also often suggest others go — word of mouth is how about 90 percent of Birthright participants.

“I always say you never know what’s going to happen or who you’re going to meet but you’re going to go to a beautiful country," Carly noted. "I owe Birthright basically my entire life. I never would've met Alex without it."

For Jason Cohen, 40, who went on the first-ever Birthright trip in 2000, it was life-changing and continues to be, as he was inspired to become more involved in his synagogue and the Jewish community center, teaching Hebrew and helping the next generation discover their faith.

Jason Cohen, who went on the first Birthright Israel trip in 2000, floats in the Dead Sea with his group from Hofstra University Hillel. (Jason Cohen)

"I wanted to teach the next Jewish learners Hebrew and the Jewish traditions," Cohen said. "My lasting legacy with Birthright Israel is to be with the next generation. That has been the most meaningful, powerful impact."

As in Cohen's case, the trip has had a significant impact on all types of participants – whether they are religious or secular, politically progressive or conservative. Many expressed their desire to marry a Jewish partner, have a strong connection to Israel or plan to one day go back.

The leading organization has also inspired other countries -- like Greece, Cuba, and Armenia -- and religions to do their own version of the trip, including Passages Israel that does a "Christian Birthright" trip.

They are currently working on an app that future attendees will be able to use to scan their passport, view their itinerary, get shopping discounts while in Israel, and further connect attendees.