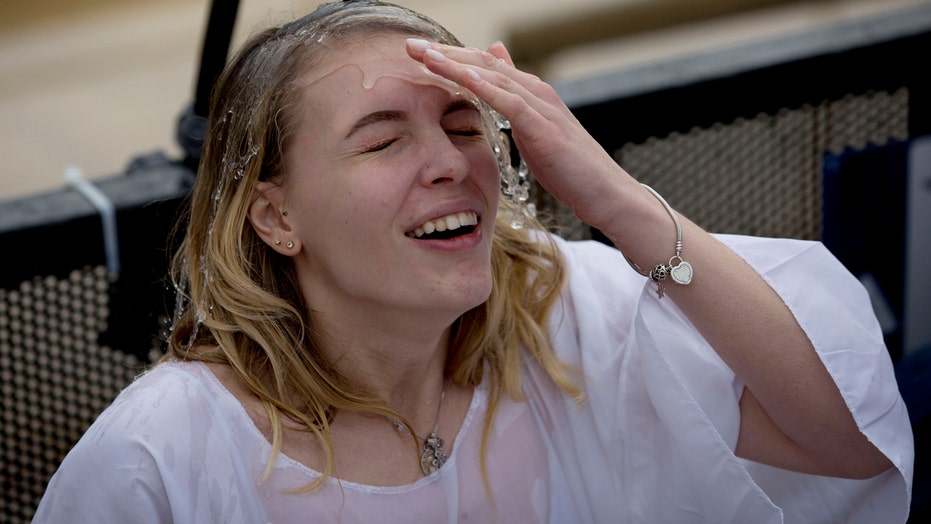 More than 20,000 Christians flocked to the banks of the Jordan River over the weekend to get baptized in the same location believed to be where Jesus Christ was baptized by John the Baptist.

“Christ is Baptized! In the Jordan!”

SOCCER STAR BAPTIZED ALONGSIDE TEAMMATES: 'I AM STILL SPEECHLESS'

That's how Christian pilgrims greet one another to commemorate the Feast of the Epiphany, Jan. 19 on the Orthodox calendar when Jesus was baptized in the Jordan River.

A Christian pilgrim takes part in baptism in the Jordan river during the Orthodox Feast of the Epiphany at Qasr el Yahud, Saturday, Jan. 18, 2020. (AP Photo/Majdi Mohammed)

“At this time of year, we wish to greet members of the Christian religion on the occasion of their baptism ceremonies,” Lt. Col. Eran Gross, head of the Jericho District Coordination and Liason Administration, said in a statement.

While many Orthodox believers across Eastern Europe and Russia braved frigid temperatures to dip three times in the water to signify the Trinity -- Father, Son, and Holy Spirit -- thousands of others flocked to Israel for a ceremony that attracted faithful from across the world.

WOMAN CAPTURES CLOUD PHOTO OF 'JESUS WITH HIS ARM OUTSTRETCHED'

On Saturday, Greek Orthodox Patriarch Theophilos III, of the Orthodox Church of Jerusalem, led a procession to the ceremony, which was attended by Gross and Civil Administration of the Coordinator of Government Activities in the Territories (COGAT) head Brig. Gen. Ghassan Alyan.

A Christian pilgrim takes part in baptism in the Jordan river during the Orthodox Feast of the Epiphany at Qasr el Yahud, Saturday, Jan. 18, 2020. (AP Photo/Majdi Mohammed)

Thousands participated in several ceremonies throughout Saturday and Sunday at the Qasr al-Yahud baptismal site, one of the holiest sites for Christians, under the protection of the IDF and Israeli police and auspices of COGAT and the Israel Nature and Parks Authority.

Five Christian denominations held baptismal ceremonies at the Jordan River since the beginning of January, the Jerusalem Post reports, and additional ceremonies organized by the Coptic and Armenian communities are scheduled for later this month.