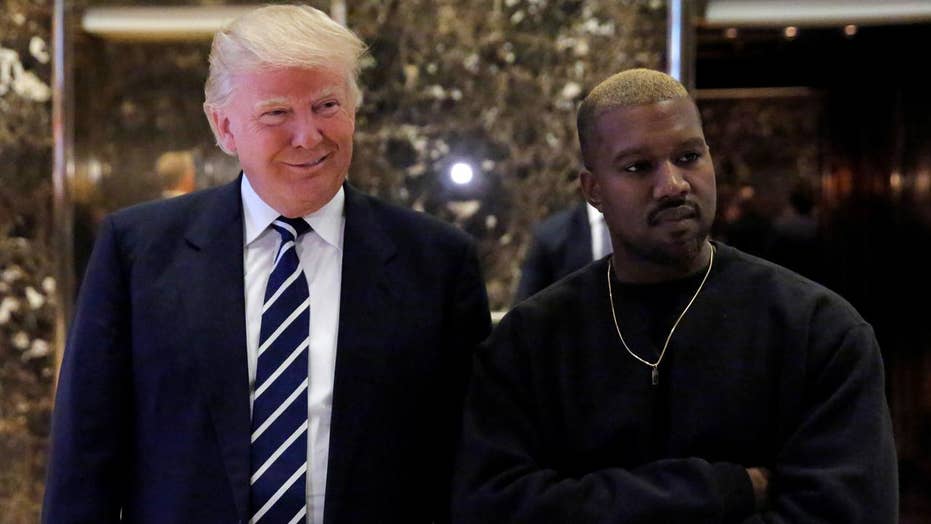 Rapper Kanye West professed his 'love' for President Donald Trump and complained that he 'couldn't get anything done' with former President Barack Obama.

Rapper Kanye West this weekend professed his "love" for President Trump and complained that he "couldn’t get anything done" with former President Obama, according to a radio host who interviewed West.

"I love the way Candace Owens thinks," West tweeted Saturday. The post followed a lengthy string of pseudo-philisophical one-liners and platitudes, including "all you have to be is yourself" and "images are limitless and words aren't."

Owens, who is black, has been criticized for her support of President Trump and for her conservative political thoughts.

SINGER SHANIA TWAIN, AFTER BACKLASH, APOLOGIZES FOR SAYING SHE'D HAVE VOTED FOR TRUMP

West took on groupthink and identity politics the next day, adding, "[W]e have freedom of speech but not freedom of thought."

According to Darden, who recounted his conversation with the famed rapper on Monday's "Ebro in the Morning" broadcast, West said he liked Owens because “she’s challenging conventional black thought."

He also expressed love for Trump, Darden said, explaining that he had “reached out to Obama for years and couldn’t get anything done, but Trump gave me a meeting.”

Obama famously called West a "jackass" during a taping of an interview, and reportedly doubled down on that epithet later.

Rapper Kanye West, pictured here with president-elect Trump in December 2016, recently said he has love for the president in a recent interview, according to a radio host. (Reuters)

The rapper reportedly told Darden his goal was to "deprogram" people, according to Vulture.

On Sunday, singer Shania Twain apologized for saying she would have voted for Trump in 2016 after a significant social media backlash.

KANYE WEST BOOED FOR SAYING HE WOULD HAVE VOTED FOR TRUMP

Fox News' Greg Gutfeld said West's comments are significant not because he endorsed any conservative views, but because he demonstrated a tolerance for hearing them.

"He challenged the mob," Gutfeld said. "Their goal is to stigmatize. Smears always shut down debate. ... There's nothing scarier to a leftist than a free thinker."

The Atlanta-born rapper has a history of provocative, unexpected statements.

"There's nothing scarier to a leftist than a free thinker."

In 2016, West told a California crowd at a concert that he would have voted for Trump.

"I said something that was kind of politically correct. I told y’all I didn’t vote, right? What I didn’t tell you … If I were to have voted I would have voted on Trump," West said.

Despite not being well-received, the rapper continued to tell his fans to "stop talking about race so much."

West's history of independent-minded comments drew the attention of Infowars host Alex Jones this week, who tweeted Monday that he admired West and wants him to come on his show.