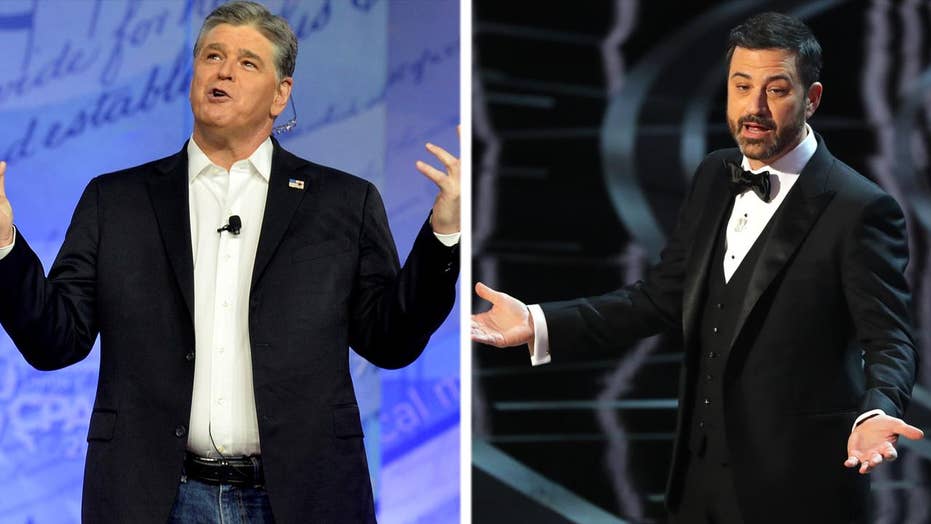 Jimmy Kimmel and Sean Hannity have been trading jabs since the comedian made fun of first lady Melania Trump’s accent. The comedian offered an apology that some are saying is not genuine.

After a heated back-and-forth between Jimmy Kimmel and Sean Hannity, the late-night host released a statement Sunday apologizing for a lewd shot at Hannity seen as mocking the gay community -- but Kimmel was unapologetic about his controversial on-air jokes at first lady Melania Trump's expense.

Kimmel's message called for an end to the ongoing feud, which started after he delivered jokes making fun of the first lady's accent.

“I will take Sean Hannity at his word that he was genuinely offended by what I believed and still believe to be a harmless and silly aside referencing our First Lady’s accent. Mrs. Trump almost certainly has enough to worry about without being used as a prop to increase TV ratings.”

Kimmel continued: “I am hopeful that Sean Hannity will learn from this too and continue his newly-found advocacy for women, immigrants and First Ladies and that he will triumph in his heroic battle against sexual harassment and perversion.”

The comedian also drew backlash for a tweet mocking Hannity's connections to President Donald Trump, a tweet that was widely seen as anti-gay. The tweet was quickly deleted, but many fans still were outraged.

In response to the tweet, Kimmel wrote: “By lampooning Sean Hannity’s deference to the President, I most certainly did not intend to belittle or upset members of the gay community and to those who took offense, I apologize.”

“Just had this pop up,” he wrote along with a screen grab of a news alert about Kimmel’s apology. “I am at a tournament with my daughter. I’ll have a full and comprehensive response tomorrow on Hannity.”

Kimmel also wrote: “While I admit I did have fun with our little back and forth, after some thought, I realize that the level of vitriol from all sides (mine and me included) does nothing good for anyone and, in fact, is harmful to our country. Even in 2018, the vile attacks against my wife and wishes for death on my infant son are shocking and I encourage those who made them to give their words and actions thought. I, too, will give words more thought and recognize my role in inciting their hatefulness.”

While many of Kimmel's fans praised the apology note, many others still were not sold, commenting that it didn't read like a genuine apology.

"This is not an apology. It sounds like you are trying to save your show from the poor ratings because conservatives will not be watching," one user wrote.

"So he apologizes to the 'gay community' because of his joke, but just can't bring himself to apologize to the First Lady for his 'harmless & silly aside' (demeaning her) on how she talks. This is is 'vitriol' that p----- everyone off to begin with and you know it yet no apology," another said.