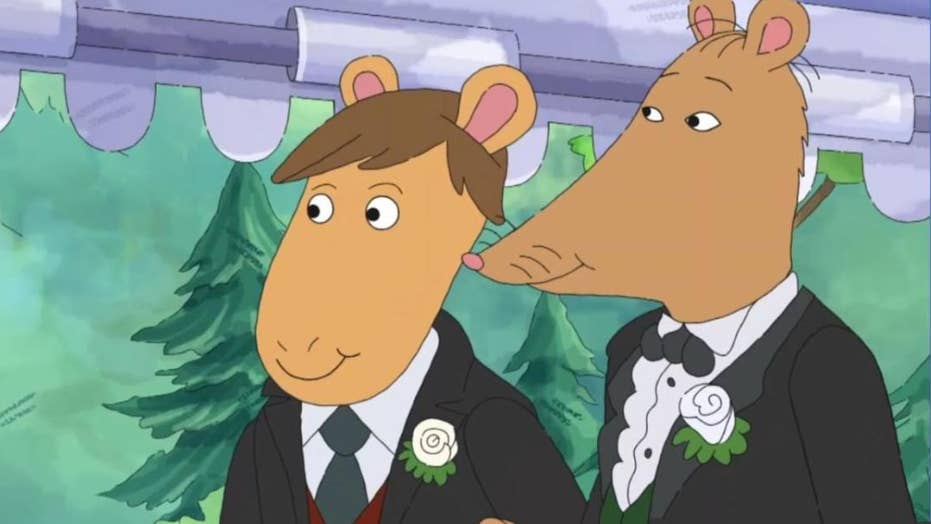 A new episode of ‘Arthur’ did not get the green light from Alabama PBS execs. The state run network refused to play the episode about Arthur’s teacher marrying his partner.

A Methodist church in Alabama plans to screen the controversial episode of "Arthur" that featured a same-sex marriage that Alabama Public Television refused to air last month.

The episode of "Arthur," titled "Mr. Ratburn and the Special Someone," aired nationally on May 13. In it, Arthur attends the wedding of his teacher and his partner.

Alabama Public Television (APT) refused to air it then or in the future. APT's director of programming Mike Mckenzie defended the decision by saying parents trust that their children can watch the station without supervision.

The move disappointed many, including Marc Brown, the creator of the hit television show.

PBS aired an episode of "Arthur" on May 13 that featured a same-sex marriage. (PBS)

Brown told People last month that he is "really proud of that episode," and noted he "will defend it to anyone who wants to talk about it."

“Why shouldn’t their teacher marry another man? We all know people who are gay, who are trans, and it’s something that is socially acceptable. Why is there this discomfort that it takes a leap into our national media?” Brown said.

He continued: “I don’t want children or people who are different to feel excluded. That’s not the kind of world we want to live in. And we want children to be educated so they can see there’s not just one type of family. Everyone should feel represented. I think we did that with Arthur.”

So for those unable to watch the episode on television, the First United Methodist Church in Birmingham decided to throw a wedding party to commemorate the episode. Their "reception" on June 15 will feature a free screening of the episode, with a wedding cake and sparkling apple juice, according to AL.com.

The church, in coordination with Sidewalk Film Festival and Shout LGBTQ Film Festival, plans to host the party and air the episode because "weddings take places at churches all the time."

"(The church) frequently communicates to the community that they are an 'open place for all,' and I think this event reflects that statement," Rachel Morgan, creative director for both festivals, said, noting she believes the church "seems like a perfect venue for the cartoon in my opinion."

Morgan said she contacted WGBH-TV, the public television station in Boston that produces "Arthur," and received approval to screen the episode.

Mckenzie said that APT previously pulled another episode of "Arthur" in 2005 that showed Buster, the namesake character's bunny friend, having two mothers.