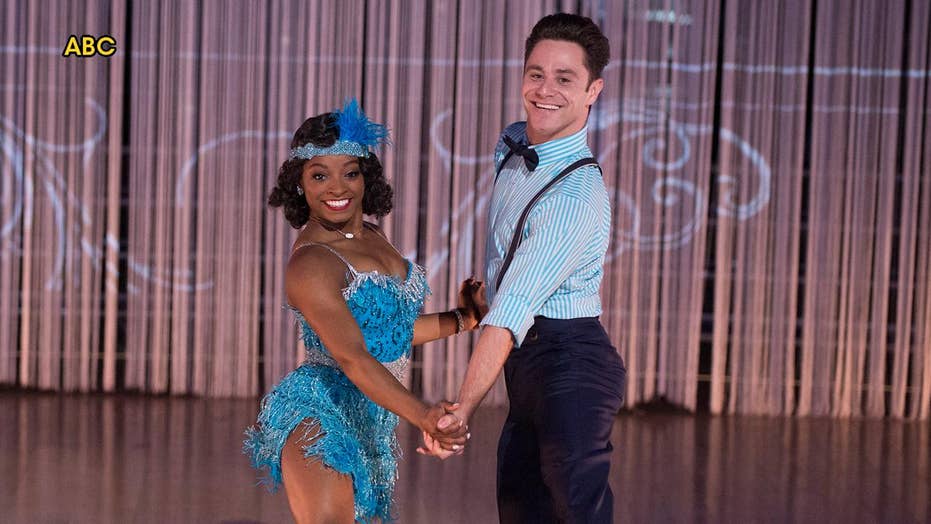 Simone Biles fights back on 'DWTS'

Gymnast Simone Biles has turned in polished performances all season on "Dancing with the Stars," but incredibly, the judges have never rewarded her with a perfect cumulative score.

And on Monday, they spoke harshly to the Olympic gold medal winning athlete. On a night on which the celebrities did two dances—a regular number with music chosen by their pros, and a trios routine with another dancer—the judges kept urging Biles to drop her mask.

Fifth Harmony singer Normani Kordei continued to look like the front runner, scoring a combined 79 out of 80 points for first place with partner Val Chmerkovskiy. Football player Rashad Jennings and pro Emma Slater were next, earning a total of 75 points, with Biles and partner Sasha Farber getting third place at 72. Ex-baseball player David Ross took away 65 with Lindsay Arnold, and bull rider Bonner Bolton and Sharna Burgess got eliminated after garnering only 58 from the judges.

Judge Carrie Ann Inaba noted after 20-year-old Biles' first dance, a foxtrot, "Your skills are unquestionable….[but] I feel like I don't know you well enough."

Julianne Hough then chimed in about her smiling during the dance, "I don't know if the smile is authentic. I want to see rawness come out."

Biles then explained to co-host Erin Andrews, "I've lived in a gym 14 years of my life," so there were things she hadn't yet experienced.

After Biles' second dance, in which she was part of a trio, Inaba gave a mixed review, saying in a garbled critique, "You let out your signature smile after you did your trick, which was great…that was very authentic…I felt you uncertain a little bit….be careful…sometimes you dance like a metronome, you're so on the beat. I want to see if you can play a little bit, holding and extending."

Biles sported a sour expression during Inaba's comments, which caused fans to 'LOL' on Twitter.

Co-host Tom Bergeron then commented to Biles, "I was waiting for you to smile at some of the compliments but you didn't."

Inaba then pretended to slap herself at the judges' table, saying, "snap, snap."

Len Goodman huffed to the young athlete, "You gotta lift your game up" for "DWTS."

After the show, Biles told reporters she stood up for herself because "I’ve spent my whole entire life in the gym training for something I’ve dreamed of since I was a little girl…I think they think because I’m 20 I should’ve gone through those life experiences but I missed out on all of that and that’s why I'm taking a year off and am trying to find it."

Partner Farber told FOX411, "Standing there getting those scores I know exactly how Simone is, she’s only 20 years old, and to hear all those things, I could feel her heart just hurting. I’m kind of sorry she had to go through that and I’m right here for her…."

Earlier, Kordei had told "DWTS" rehearsal cameras that she once had been bullied online and been subjected to racist taunts.

The singer turned in a flawless contemporary dance with Val Chmerkovskiy and told FOX411 backstage that she would say to the haters, "I still have love for you."

Kordei said her performance "was definitely healing for myself and also for my family, just because they know the struggle I went through as well. My mother and my dad and my mom cried, [it was] super emotional."

Thrilled former Chicago Cub Ross told reporters, "When I signed up [for DWTS] I never thought I would've made it this far….it's going to be a sad day when that ends. But I'm also excited that when it does, I get to go home to my family. It's a win-win for me."

Ross moves on to next week's semifinals, along with Kordei, Biles, and NFL star Jennings, who are the final four.

Bolton was sent home after a rough night -- but Jennings said of the bull rider who broke his neck last year, "I'm so proud of him….all the things he’s had to overcome…we're going to keep in touch."