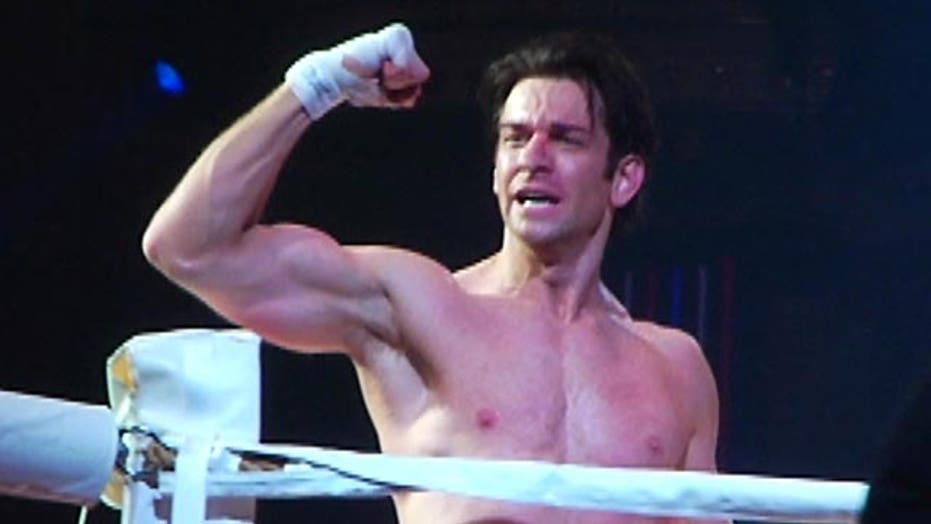 New musical based on the hit movie

NEW YORK – Broadway star Andy Karl laces up the gloves to play “Rocky” in the new movie turned musical. Karl spoke to FOX411 about what advice he got from Sylvester Stallone before getting into the ring and his new daily workout and diet, which includes “drinking the eggs” on stage.

FOX411: How many times have you seen the movie now?
Andy Karl: I've seen the movie millions of times. You can't get away from this movie. It shows up on some channel somewhere every day… I enjoy it. I enjoy watching Stallone's performance. He's very honest. It's also his baby, he's part of it. He wrote it. It's something where you're seeing a genuine performance for the first time really stand out. It's what put him on the map so for me I'm trying to honor that by being as honest in the show as I can to the character. You know, studying the character, as I have and talking to Stallone and taking all his mannerisms and things like that but also making it true for myself so that the audience isn't watching a bad impersonation every night. They're watching the story of Rocky which carries a lot of dignity, a lot of heart, a lot of love, and a lot of punches to my face.

FOX411: What advice did you get from Sylvester Stallone in how to play Rocky Balboa?
Karl: There were two things that he said that really struck with me. One was “throw punches from your shoulders,” and the other was about a song in Rocky's heart and that is "smile though your heart is breaking." I thought that was such a beautiful way of putting it as far as the character. He still carries a lot of pride and a lot of dignity even though he has nothing in the world. But eventually he's given all these amazing things: prize fights, love, dignity, fans in his neighborhood, people talking about him, and he's able to accept all that with humility and keep smiling and have all those wonderful things come to him because he's a good person. So I'm glad Stallone sort of saw that in me and gave me the honor of playing the role now.

FOX411: How many times did you practice “Yo Adrian!” in the mirror to get it just right?
Karl: That’s great when you watch the film over and over again… There's plenty of people I know that have come up to me on the street and they're like "Yo Adrian!" or I get people who actually scream lines to me from the audience… We supply this great thing about living up to the icon but also putting it in a stage adaptation that is so exciting. We have this great amazing fight at the end the last 20 minutes of the show that really envelopes the audience into a prize fight.

FOX411: What were the main “Rocky” things you had to have?
Karl: We put “Eye of the Tiger” in there. It’s a great montage workout moment and it’s sort of what everyone remembers. So we're keying into these parts that mean something to people in the audience and I think that's important and I have a wonderful time doing that.

FOX411: [What’s] your new diet and workout routine?
Karl: I gotta get in that ring several times during the show. I gotta punch the beef, and I gotta run up the stairs. You'll see a lot of me sweating but that's because I'm working hard because I really want the audience to be a part of this and enjoy what they're seeing. So I'm putting in the extra effort, diet, the working out, to making sure I keep the stamina up for the show.

FOX411: [Any boxing] injuries?
Karl: My nose clicks. It clicked on me. I got head butted there. I had a black eye here for rehearsals. My neck I couldn't move for a few weeks while I was in rehearsals. But it's this science, it sounds awful, but it's actually something that I’ve gotten used to and I need the punches now and if I don't get the punches, I don’t feel like I'm doing enough and I can't respond to the punches I’m getting in order to give them back.

The entire cast has taken on this sort of Rocky spirit and everybody is jazzed to sort of watch the fight every night. Even people making sure the crowds is in the right places because we do invite audience up on stage to watch… in certain seats they go behind the ring and so it's a full 360 vision of the fight. We have a certain amount of people sitting there that have to go up the stage and watch the fight from there. It is like nothing I've ever seen before and I get a lot of people saying after the show "we've never seen anything like this before." I think that's important for theater, to invent something new and to provide something that exciting for people to just come on in. So on all points: storyline, “Yo Adrian!”, drinking eggs, fighting… I think we've got this fully developed piece that isn't just throwing a movie up on a stage. It's about keeping the integrity and the dignity of the movie and bringing it to the audience's lives every night, and it's spectacular.